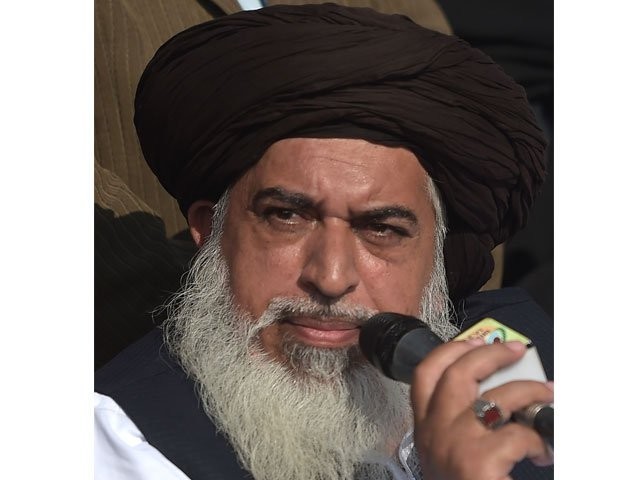 Head of the Tehreek-e-Labaik Pakistan Khadim Hussain Rizvi announces the end of sit-in protest on a blocked flyover bridge during a press conference in Islamabad on November 27, 2017. PHOTO: AFP

Speaking at Liaquat Bagh at a ceremony to honour people killed during the Faizabad sit-in, he said that the politicians instead of clergy were responsible for the miserable conditions of the country.

“The Khatm-e-Nabuwat conference will be held at Bagh-e-Jinnah Karachi on January 14,” he announced roaring “In Faizabad, we sacrificed only eight lives fighting the blasphemy, but if circumstances demand, we will be ready to sacrifice millions of lives.”

Scores of people from across the country attended the Tajdar-e-Nabuwat Conference at Liaquat Bagh where Rizvi said that his party wants to shape the constitution and the governance system as per the rules set by Holy Prophet.

He said although his people wanted peace, they would not remain silent on the issue of blasphemy.

Denying accusations of Sheikh Rasheed regarding bribery for the sit-in, he said that the Awami Muslim League’s leader has historically been spitting venomous remarks against his political opposition, including Mohtarma Benazir Bhutto. “We must make it clear that this time he is in conflict with moulvis,” Rizvi said, “We will see how he manages to win the elections opposing us.”

“If our party comes into power we will impose a simplistic way of live for the rulers as has been the practice of Holy Prophet and his Caliphs. We will get rid of all un-Islamic customs and traditions and eliminate interest from the financial system,” Qadri said.

The manifesto also promises an equitable distribution of wealth and inclusion of Islamic teachings in the curriculum.