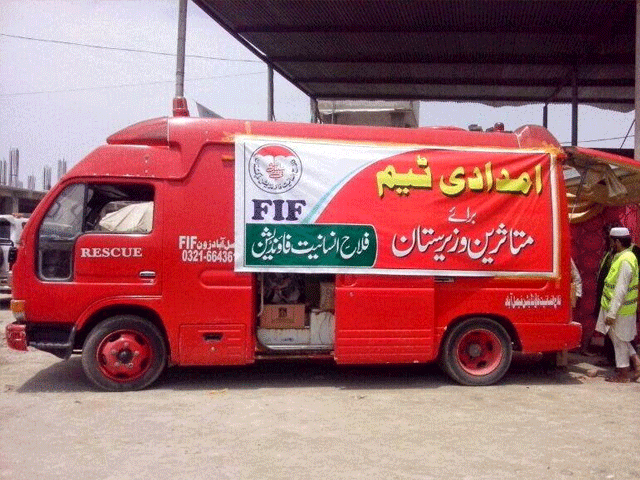 ISLAMABAD: The government on Monday made a decisive move against proscribed organisations, including Hafiz Saeed’s charity Jamaat-ud Dawa (JuD), that were still working undercover – anticipating a joint US-India bid to force a global anti-terror financing organisation to take action against Islamabad.

The government prohibited fundraising as well as social, political, welfare and religious activities being carried by proscribed organisations and individuals despite the ban.

To the extent of the Islamabad Capital Territory, the local administration also issued a notification to prohibit all such activities by proscribed organisations and individuals.

Also, the Securities and Exchange Commission of Pakistan (SECP), through a notification on Monday, stopped all companies from donating cash to proscribed organisations and individuals mentioned in the sanctions regime maintained by the United Nations Security Council.

The action came after Prime Minister Shahid Khaqan Abbasi chaired a meeting of the high-powered National Executive Committee (NEC) on anti-money laundering that was attended by the representatives from the federal government, intelligence agencies and provincial governments, said sources in the Prime Minister’s Office.

“The government is very serious about meeting its international obligations,” said Miftah Ismail, Adviser to the Prime Minister on Finance, Revenue and Economic Affairs, while talking to The Express Tribune.

He said the government would fulfil its all international obligations regarding money laundering and terrorism financing.

Ismail did not specify the actions discussed by the NEC.

However, the sources said that the NEC meeting, convened on the request of the finance ministry, warned the higher authorities of a possible action that the Financial Action Task Force (FATF) may propose against Islamabad during a meeting next month.

The FATF is a global standard-setting organisation for measures against money laundering and terrorism financing.

The NEC meeting was held hours before US President Donald Trump, in a strong-worded tweet, accused Pakistan of “providing safe havens for terrorists” being hunted by the US hunts in Afghanistan. Trump said that the US foolishly “gave Pakistan more than $33 billion in aid in return of nothing”.

A plenary meeting of the FATF had been held in Argentina in November last year where the US and India had raised the issue of proscribed organiaations, mainly the JuD and its philanthropist organisation Falah-e-Insaniat Foundation (FIF), according to Pakistani officials privy to the FATF’s meeting.

The two countries had raised the issue of collection of animal hides by the FIF as well as the political activities being carried out by the Milli Muslim League (MML), said the officials.

The MML is a purported political offshoot of the JuD which is on the list of proscribed organisations. The Election Commission on Pakistan (ECP) has already rejected application to enlist the MML as political party.

According to the Pakistani officials, the FATF plenary is going to meet from February 18 to 23 in Paris.

“China, which has so far blocked the US and Indian moves, has also advised Pakistan to take some decisive actions against proscribed organisations,” said the officials.

“Pakistan has to make a tangible move before the planned plenary meeting of the FATA,” said the sources.

In a letter issued last month, the finance ministry had requested law-enforcement agencies and all the provinces to take measures against proscribed organisations working under various covers, said the sources.

In case, the FATF takes any adverse action against Islamabad, the country will face great difficulties in conducting financial transactions, according to the sources in the finance ministry.

However, those affiliated with the JuD deny its involvement in any illegal activity, calling the FIF an organised philanthropist group of the country.

In the past, Pakistan has remained on the grey list of the FATF.

In February 2015, the FATF had welcomed Pakistan’s significant progress in its fight against money laundering and terrorism financing, noting that Pakistan had established the legal and regulatory framework to meet its commitments in its action plan regarding the strategic deficiencies that the FATF had identified in June 2010.

“However, Pakistan will have to work with the Asia Pacific Group (APG) on Money Laundering as it continues to address the full range of AML/CFT issues identified in its mutual evaluation report, in particular, fully implementing UNSC Resolution 1267,” it said.

The United Nations Security Council resolution 1267 was adopted unanimously in 1999. The council designated Osama bin Laden and associates as terrorists and established a sanctions regime to cover individuals and entities associated with al Qaida, bin Laden and/or the Taliban wherever located.