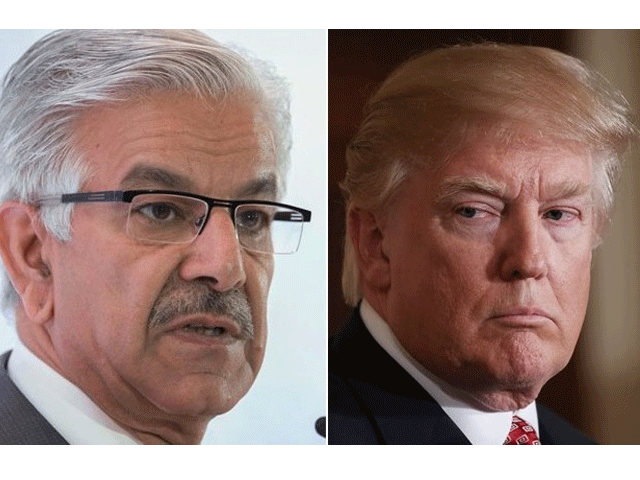 Foreign Minister Khawaja Asif, in response to Donald Trump’s tweet said on Monday that Pakistan was not worried as it had already refused to ‘do more’ for the US.

“We have already told the US that we will not do more, so Trump’s ‘no more’ does not hold any importance,” he told a private TV channel. “Pakistan is ready to publicly provide every detail of the US aid that it has received.”

Earlier in the day, Asif said he would respond to Trump shortly, minutes after the US president again alleged Pakistan of providing safe havens to terrorists.

Trump remarked that the US had ‘foolishly’ given aid to Pakistan over the course of 15 years and Islamabad had been deceitful by providing safe havens to ‘terrorists’ from Afghanistan.

“We will respond to President Trump’s tweet shortly Inshallah,” Asif tweeted. “Will let the world know the truth..difference between facts & fiction.”

We will respond to President Trump's tweet shortly inshallah…Will let the world know the truth..difference between facts & fiction..

Pakistan has time and again rejected the notion of ‘do more’, saying it had done enough and could not do more for anyone.

In August this year, Trump cleared the way for the deployment of thousands more US troops to Afghanistan, backtracking from his promise to swiftly end America’s longest-ever war, while pillorying ally Pakistan for offering safe haven to “agents of chaos.”

While former foreign minister Shah Mahmood Qureshi said that Pakistan should move forward taking into account its own interests, regardless of US aid, Senator Sherry Rehman said Coalition Support Funds were never counted as aid.

“It was compensation on expenses incurred re joint action on border. Other “Aid” we should indeed talk about, because Pk never charged for NATO traffic,” she tweeted.

Coalition support funds has NEVER been counted as AID in any accounting by Pakistan, nor will it be seen as part of assistance. It was compensation on expenses incurred re joint action on border. Other “Aid” we should indeed talk about, because Pk never charged for NATO traffic

Jamaat-e-Islami chief Sirajul Haq said the US government was holding Pakistan responsible for it’s own failure.