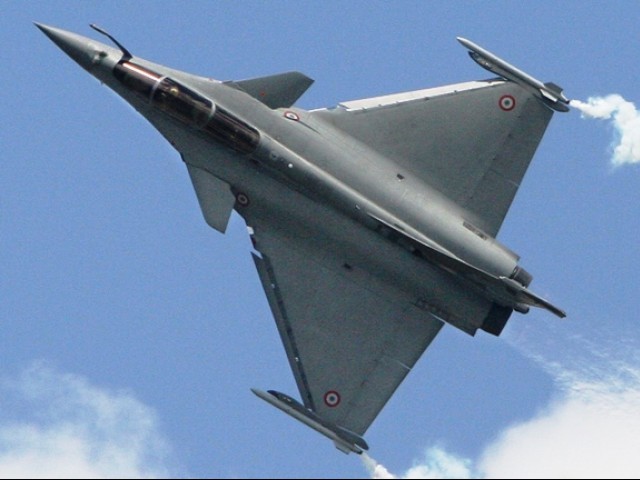 A Dassault military jet Rafale in Le Bourget. On April 28, 2011 India has shortlisted Dassault's Rafale and the Eurofighter Typhoon for a 12 US billion dollar fighter jet deal, cutting out US giants Boeing and Lockheed, sources said. PHOTO: AFP/FILE

“Only France’s Dassault and Eurofighter have been requested to extend their commercial bids,” a defence ministry official, who declined to be named, told AFP.

One of the most valuable and sought-after military contracts of recent years, the deal for 126 fighters has witnessed fierce competition between defence majors like Boeing and Lockheed Martin, Sweden’s Saab AB and the Russian makers of the MiG 35.

It was also the object of intense lobbying during a series of high-profile visits to India last year by US President Barack Obama, French President Nicholas Sarkozy and Russian President Dmitry Medvedev.

Reports that a final shortlist had been drawn up were borne out by a statement Wednesday from Saab AB that its JAS-39 Gripen fighter had fallen out of contention.

“Gripen has not been shortlisted for the Indian Medium Multi-Role Combat Aircraft (MMRCA) programme,” the statement said.

The Indian defence ministry refused immediately to confirm that the US and Russian bids had also been dismissed.

A statement from Lockheed Martin said only that it had been informed by the US government of a “letter from the Indian ministry of defence concerning the MMRCA competition”.

It gave no details of the letter’s contents.

“We understand that the US government is working on a response,” the statement said.

The Eurofighter is made by the four-nation European Aeronautic Defence & Space consortium, representing Germany and Spain, Britain’s BAE Systems and Italy’s Finmeccanica.

The long-delayed contract includes the outright purchase of 18 combat aircraft by 2012 with another 108 to be built in India.

India, the biggest importer of military hardware among emerging nations, issued the request for proposals to the six firms in 2007 and trials of the aircraft competing for the deal began a year later.