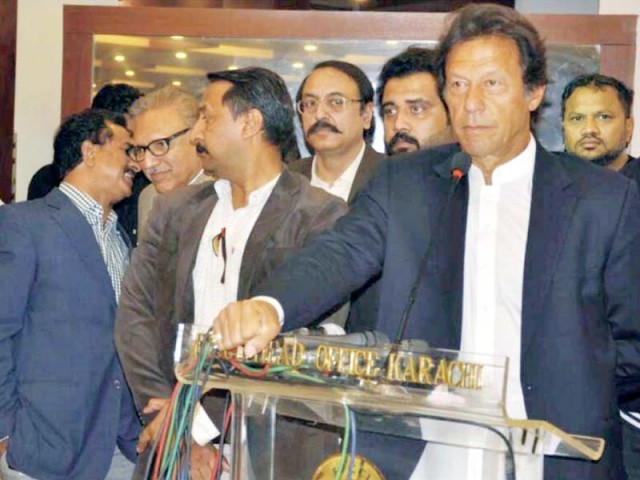 The cricketer-turned-politician said that his party will take the business community on board if it comes to power in the centre. PHOTO: NNI

KARACHI: In a rare deviance from standard political statements, Pakistan Tehreek-e-Insaf (PTI) Chairman Imran Khan said the country’s economy needs to be stabilised through comprehensive tax reforms, starting with the Federal Board of Revenue (FBR).

It is the most important institution of the country and needs to be reformed completely to achieve economic stability, said Khan in his first appearance in Karachi since the end of October and meant to assure the business community that it will not be ignored as elections approach.

“How difficult is it to fix the FBR?” asked Khan, adding that powerful people prevent FBR’s reform for personal benefits.

He said this while addressing representatives of the Federation of Pakistan Chambers of Commerce and Industry (FPCCI) at its head office. The cricketer-turned-politician said that his party will take the business community on board if it comes to power in the centre.

He said that a growing trade deficit is a major cause for concern and because of misplaced economic policies the country is lagging behind regional competitors.

Earlier, FPCCI President Zubair Tufail said that the apex business body of the country has invited the PTI leadership to present its economic policies, especially if the party comes to power in the 2018 elections.

“How will your party create employment opportunities if it comes to power?” asked Tufail.

The FPCCI criticised the FBR’s attitude and said that the top collection body uses arm-twisting tactics, which is not favourable for the economy.

“Tax collection system in the country should be such that companies pay taxes willingly without any use of force,” he stressed.

Tufail also said that Pakistan should provide an amnesty scheme to those who took their money out of Pakistan out of fear of unfavourable economic conditions and government policies.

“I am personally against providing tax exemptions, but I think the country can benefit if it allows a one-time amnesty for the last time,” he said.

However, without opposing the FPCCI president’s suggestion, PTI MNA Asad Umar, who also served as Engro Corp CEO till 2012 before he took early retirement, said that out of eight amnesty schemes, three have been given by the current government, with each one failing to produce the desired results.

Umar, who has spoken against amnesty schemes in the past, said that FBR’s overhauling is the most important task without which Pakistan cannot boost taxes on  a sustainable basis.

Highlighting high indirect taxation as regressive in nature, he said that Pakistan’s system is the most inefficient in the region.

“It is not a coincidence that Pakistan added about $22 billion in its debt liabilities in the last four years. This is almost equivalent to the amount that our exporters could have exported during the period,” he added.

PTI General Secretary Jahangir Khan Tareen commented that the current trust deficit between the government and the business community should be bridged for the sake of the economy.

“We will do institution building if we come to power so that the businessmen of Lahore and Karachi do not have to frequent Islamabad to get their work done,” he added.