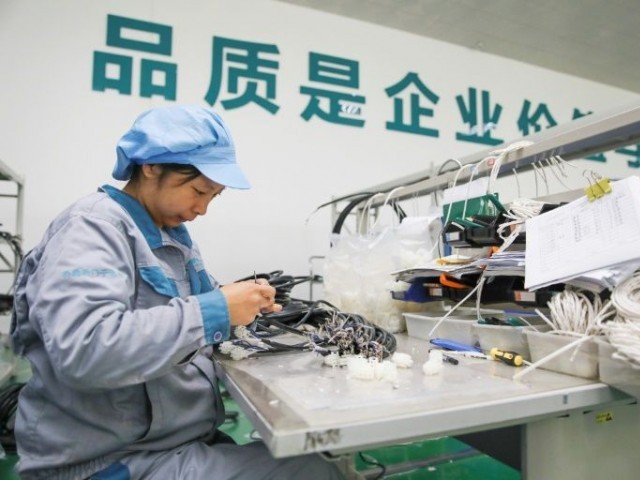 A woman working in a factory in Jiangsu province, China, earlier this month. PHOTO: AFP

The consumer price index (CPI) — a main gauge of inflation — rose by 1.7% in November from a year ago, compared to a 1.9% increase the previous month and 1.6% in September, said the National Bureau of Statistics.

This easing was greater than forecast, with Bloomberg analysts predicting a rise of 1.8% in the world’s second largest economy. Food prices continued to fall, with the CPI’s biggest component dropping by 1.1% year-on-year and only fresh fruit and lamb showing a rise.

Outside the food and energy sectors, inflation posted a rise of 2.3%, stable compared to October. But a sharp slowdown was posted by the producer price index (PPI), which measures prices of goods at the factory gate and only grew by 5.8% year-on-year compared to 6.9% in the two preceding months.

This deceleration, which reflects easing prices of key materials, was in line with analysts’ expectations despite factory closures and a large reduction of excess industrial capacity as Beijing leads a massive anti-pollution campaign over the winter.

The figures suggest that economic pressures have not let up despite encouraging pointers published in the last two weeks, including an acceleration of manufacturing activity and an unexpected jump of exports in November.

“The CPI drop was mostly driven by the decline in food prices, while PPI fell because the base last year was too high,” Tommy Xie, an economist at OCBC in Singapore.

“I expect consumer inflation to remain largely stable and fluctuate around 2% in the coming year, while the growth of PPI will very likely fall below 5% in December.”

Moderate inflation can be a boon to consumption as it pushes buyers to act before prices go up, while falling prices encourage shoppers to delay purchases and companies to put off investment, both of which can hurt growth.

November’s inflation figure of 1.7% is still well above Beijing’s target of 3% — enough to give the country’s central bank room to manoeuvre in its efforts to reduce debt and manage financial risks.