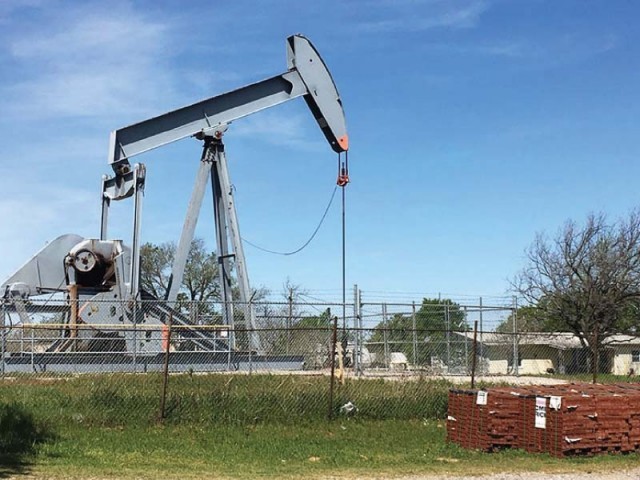 Officials said that the Finance Division may also impose some other tax on petroleum products to meet the shortfall caused by zero petroleum levy on these two products. PHOTO: REUTERS

ISLAMABAD: The Finance Division has tightened its noose around the Ministry of Energy (Petroleum Division) to collect Rs392 billion from the oil and gas sector to meet the budget target for financial year 2017-18.

Sources said that following pressure, the Petroleum Division was forced to impose a petroleum levy not only on locally produced liquefied petroleum gas (LPG) but on imported LPG as well in a bid to collect Rs2 billion in the remaining period of the ongoing financial year.

A senior government official told The Express Tribune that the Finance Division wanted to collect Rs2 billion on LPG at any cost to meet the revenue target for the current financial year. Following this, the Petroleum Division imposed a petroleum levy on locally produced LPG, despite having no legal provision to impose it.

The Finance Division has found a new way to impose regulatory duty on imported LPG to find revenue to meet the targets for the current financial year, officials said, adding that the Council of Common Interests (CCI) had approved imposition of petroleum levy on locally produced LPG to bridge the difference in price between locally produced and imported LPG for smooth imports.

But in a bid to collect more revenue, the Finance Division also wanted to impose petroleum levy on imported products and finally imposed regulatory duty on imported LPG, thereby killing the spirit of the new LPG policy, the sources claimed.

Local gas production currently stands at 2,000 metric tons per day. The total demand of LPG, however, is 0.9 million metric tons per year with half of it being produced locally.

Officials said that the Finance Division had also conveyed to the Petroleum Division to collect Rs160 billion as petroleum levy on petroleum products. During the last few months, the government had been collecting zero petroleum levy on kerosene oil and light diesel oil (LDO) to keep their prices low compared to prices in the international market.

Officials said that the Finance Division may also impose some other tax on petroleum products to meet the shortfall caused by zero petroleum levy on these two products.

The Finance Division has also directed the Petroleum Division to make efforts to collect Rs43 billion gas development surcharges from gas consumers, along with Rs110 billion on account of Gas Infrastructure Development Cess (GIDC which was imposed on gas consumers to collect money which was meant to be spent on building gas pipelines in the country.

But the government had misused this fund and spent on projects like the metro bus and gas utilities were forced to borrow multibillion rupees from commercial banks which would be collected additionally from the gas consumers to make payments.

Since its imposition, the government had collected over Rs350 billion from the consumers but not a single penny was spent on gas pipelines projects.