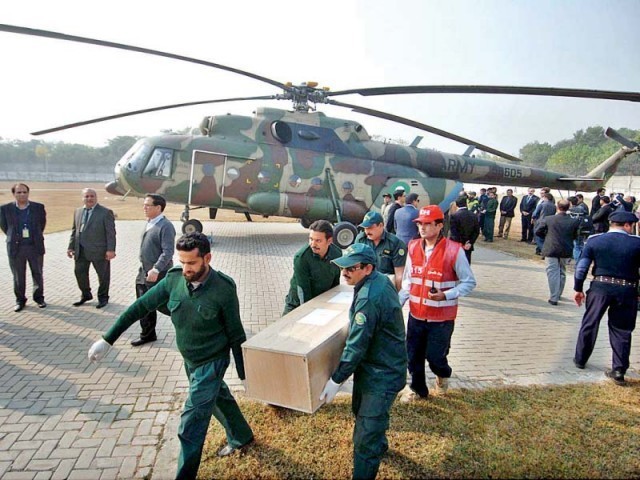 Eyewitnesses recall moments before the plane had plunged into the hillside. PHOTO: AFP/FILE

HARIPUR: As locals and schoolchildren streamed towards the site where a plane had crashed in the hills of Havelian almost a year ago, the chilly air hung heavy with sadness.

Silence filled the December morning as they prayed for the 48 people who died in the crash — including 42 passengers, five crew and one ground engineer — in Batolni village.

“I was heading home when the plane crashed,” said an eyewitness Abdul Baseer, adding that since they are villagers, they usually head home before the sun sets.

“When I saw the plane pass low over the hills, I immediately became afraid and I thought for a moment what has happened to the plane that it is trying to land in our village,” he said, adding that a few moments later the plane disappeared from his sight soon followed by the news that a plane had crashed on the hills near Batolni.

“As soon as we heard the news, a friend and I rushed to the spot,” Baseer said, adding that they reached the spot after a half-hour hike.

“What we saw there was nothing short of scenes from hell,” he recounted, adding that the entire area was ablaze with plane parts strewn all over the hillside.

Soon after the crash, dozens of locals from villages around the crash site rushed to the spot. They said that a year after the incident, the sight of the plane plunging into the hillside was still fresh in their minds.

“It is our tradition to rush to the scene of any accident to offer aid,” said one villager while explaining the immediate response of locals.

Gul Khan, a resident of Langra village, near the crash site, said that the plane had crashed nose-first, which meant that most of the bodies were in the fore section of the aircraft.

“The flames emanating from the aircraft scared me,” said Feroze Khan, who lives in the nearby village of Philwari.

He added that before crashing, the plane had circled the hill at least once.

“It seems as if the pilot had spotted a barren field at the foot of the hill and wanted to land the plane there,” Feroze said, adding that as the plane came around for a second pass, it was already on fire.

Sher Afzal Khan, a wizened native, termed the crash as the worst incident in the area’s history, adding that locals have been unable to forget it.

“I still remember pulling out the bodies, it was an apocalyptic scene.”

Chacha Yousaf, an elder who lives in Batloni village, recalled how the plane had passed low over his house.

“There were screams coming from inside the plane,” he claimed.

However, some commended the pilot of the plane for avoiding any populated areas, lest the crash toll rose.

The pilot manoeuvred away from densely populated areas in Havelian and was successful in his attempt,” said social worker Imtiaz Khan.

He added that on the other side of the hill the plane crashed in, there is a dam with deep water, perhaps the pilot was aiming for that to avoid on-ground casualties.

One local was particularly upset over the death of singer Junaid Jamshed in the crash.