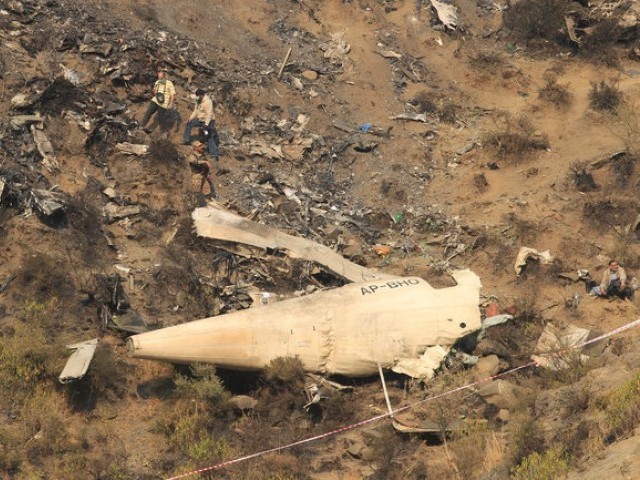 PESHAWAR: For Chitral resident Shah Fahad, December 7 brings to his mind as many questions as it does the anguish of losing his sister.

It was on this day in 2016 when a Pakistan International Airlines (PIA) flight carrying around 48 people crashed in the hills near Havelian. No one on board survived.

But a year on, Fahad, like other heirs of the crash victims, is still waiting for the government to publish the official investigation report definitively identifying the reasons behind flight PK-661’s crash.

Legal heirs of around 27 crash victims have been compensated by the government so far, while cases of around six victims are still being processed. Six others are still involved in litigation.

Relatives of the crash victims, however, say that they do not care much about the compensation, rather are far more interested in the reasons leading to the deadly crash.

“We want to know why the plane crashed killing our loved ones. We want to know the reasons, but things are being kept hidden, deliberately,” Fahad said, adding that he been representing at least 10 victims.

He questioned the reasons for keeping the report hidden, adding that it is giving rise to suspicions.

“I wonder why the report has not yet been shared with relatives of the victims,” Fahad asked, adding ‘Not even a single person across the country has any idea about it [crash reasons and investigation report] nor are they going to share things [from the report] with us.”

“The media has highlighted the issue and we hear that [airline] people have been cleared but that is not authentic and only the Civil Aviation Authority (CCA) provide us with an authentic report,” Fahad told The Express Tribune.

“People ran from pillar to post just to secure a death certificate,” he lamented.

According to Mashood Tajwar, a spokesperson for the Pakistan International Airlines (PIA), legal heirs of most of the crash victims have been compensated, some were in process and some in litigation while the remaining were stalled owing to lack of key documents.

“The insurance company does not accept incomplete documents and this is why some files were yet to be closed,” Tajwar explained to The Express Tribune on phone.

Soon after the deadly crash, PIA officials said that the aircraft — which had served in the PIA fleet for nearly nine years — had undergone regular maintenance, passing with an “A-check” certification a few months before it crashed. Moreover, some reports had suggested that engine failure had caused the crash.

Meanwhile, a CAA official, when asked about the investigation report, said that the department was not a part of the authority.

“The Safety Investigation Board (SIB) is a separate, independent body which works under the federal government,” said CAA Spokesperson Parvez George.

He added that the board had been separated from the CAA a few years ago and hence he could not answer for them.