PESHAWAR: At least nine people were killed when terrorists clad in burqas stormed the Agriculture Training Institute in Peshawar early Friday morning in an attack reminiscent of a deadly assault on a university in Charsadda in 2016.

Over 32 people – among them a police sub inspector and two army soldiers – were also wounded in the assault claimed by the Tehreek-e-Taliban Pakistan, the outlawed umbrella of terrorist groups.

Medics at the Hayatabad Medical Complex and the Khyber Teaching Hospital, where most of the casualties were rushed, said they had received a total of nine bodies and were treating some 38 injured, including some in critical condition.

The dead include six students, a security guard and two civilians.

According to the provincial police chief, IG Salahudin Khan Mehsud, they assembled a police party, led by SSP Operations Sajjad Khan, minutes after the attack had started.

The police cordoned off the premises and mounted the operation to neutralise the terrorists. The attackers wanted to methodically kill anyone and everyone, but luckily there were a few students as most of them had gone home.

One wounded student, Ahteshan ul-Haq, told Reuters that about 120 out of nearly 400 college residents were present during the attack, as most had gone home for a long holiday weekend. 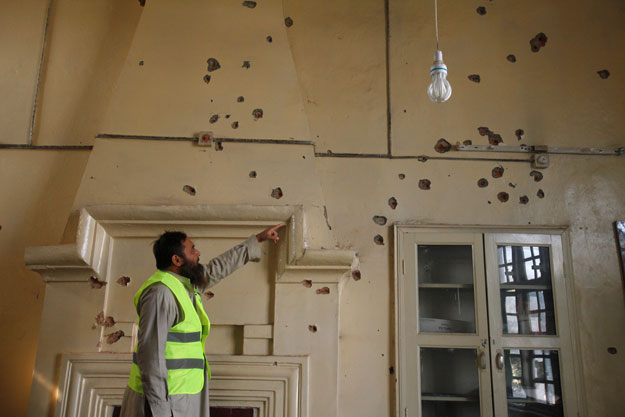 “We were sleeping when we heard gunshots. I got up and within seconds everybody was running and shouting ‘the Taliban have attacked’,” he said.

Noor Wali, a 19-year-old student at the institute, described a terrifying ordeal that began when he was woken by gunshots. “I rushed to the door and saw a fountain of blood pumping out of the shoulder of my roommate who was standing outside the room,” he told AFP.

He and another student rushed to his aid, and hid from the gunmen for almost an hour before they were rescued by security forces. “The other student was pressing the wound with his hands to stop the blood and I had to put my hand on his mouth so that he cannot scream,” he said.

“We took shelter inside the bedroom and were begging the injured student not to make any sound as the terrorists might hear it and kill us.”

“Some students got out to watch the gun-battle and they were shot by the terrorists,” said student Zahid Ullah.

Hours after the army took over the operation, the military’s media wing, the ISPR, said the operation has been completed and all terrorists have been neutralised.

The terrorists, who were wearing burqas, entered the premises in an auto rickshaw. They opened fire at security near the gates, killing one guard and injuring another before making their way inside and targeting the student accommodation, police said. 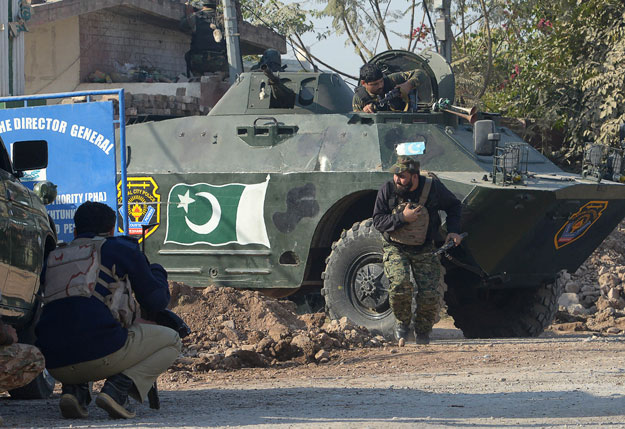 Briefing the media after the operation at the Central Police Office, along with Health Minister Shahram Taraki, IG Mehsud said the police force reached the site within four minutes owing to coordinated efforts.

“We received the call at 8:35am and the forces were inside the university within four to five minutes,” he said.

“Sanctuaries of terrorists in Khyber-Pakhtunkhwa and Fata have been eliminated but now they are operating from across the border,” he added. “This is all planned by hostile agencies of a neighbouring country but luckily their capacity [to mount attacks] has been significantly degraded.”

IG Mehsud said that the army and its Special Services Group also acted quickly which was why they managed to minimise casualties.

The provincial police chief said a huge cache of weapons and explosives was seized during the operation including three suicide vests which the terrorists could not detonate.

“Around 20 hand grenades, AK-47 assault rifles and IEDs (home-made bombs) were also recovered in the operation,” he said. “One of the bombers had managed to trigger his vest.”

He added that three terrorists had been killed in the operation, while there was another body which could not be identified immediately. “One policeman and two army soldiers are among the injured,” he added.

Some of the fatalities have been identified as Abdul Majeed, Siddiqur Rehman, Ameen Jan, Bilal Ahmed, Qasim Ali Shah, and Muhammad Bilal.

The deadly attack took place even though security has been stepped up across the country for 12 Rabbi-ul-Awwal, the birth anniversary of Prophet Muhammad (PBUH).

The area where the deadly attack took place is a hub of educational institutes in the city. The sprawling University of Peshawar is situated nearby.

The spokesperson for the Peshawar University announced that all subsidiary institutes, including University Public School, University Model School, Jinnah College for Women and University College for Boys, will remain closed on Saturday.

It has also been a source of capacity building of officers and officials under various schemes and developmental projects. There is a hostel behind the institute and a wedding hall inside. 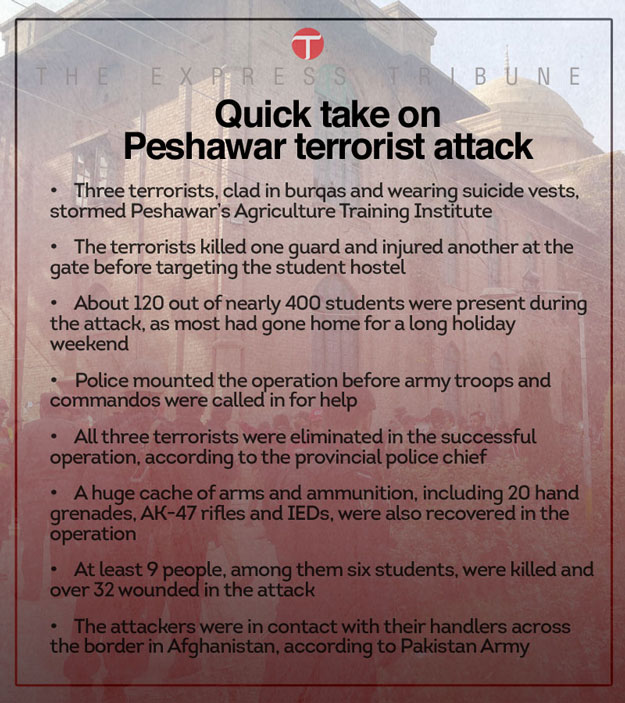 Prime Minister Shahid Khaqan Abbasi strongly condemned the terrorist attack and prayed for the eternal peace of those killed and early recovery of the injured persons.

Interior Minister Ahsan Iqbal lauded the security forces for their quick response. “The nation is united to eradicate militancy from the country,” he said.

“Saddened by condemnable terrorist attack in Peshawar this morning. My prayers to the victims and their families. Commend the rapid response of KP police and army that helped in containing damage and concluding the operation.”

Earlier in November, the intelligence agencies had alerted authorities at the Bacha Khan International Airport (BKIA) of a possible terror attack on passenger planes – most likely on an international flight.

A CAA official said the alert was not only for BKIA but all such facilities across the country. However, since the BKIA fell within their domain, necessary steps have been taken to ensure safety of passengers, installations and the facility.