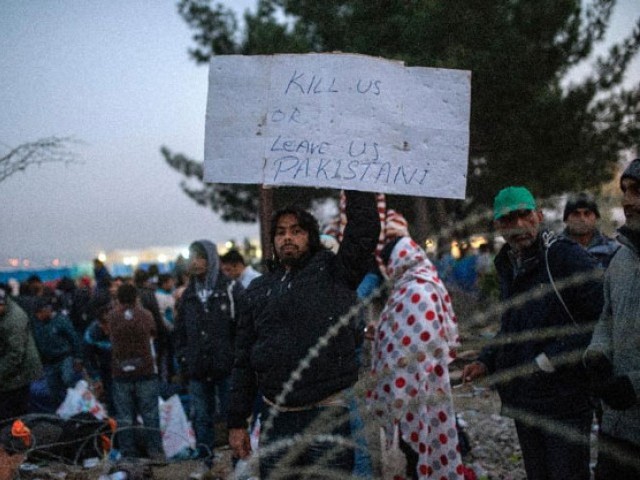 A migrant from Pakistan holds a placard as he waits with other migrants and refugees to cross the Greek-Macedonian border near Gevgelija on November 20, 2015 PHOTO: AFP

ISTANBUL: Turkish police rescued 57 Pakistani migrants who had been chained up in an Istanbul basement by people smugglers trying to extort money, local media reported Tuesday.

The smugglers told the migrants that they would take them to Europe for $10,000, with the money to be paid after they arrived, according to Hurriyet daily.

Some of those found on Monday had been tortured, the newspaper added.

Police also detained three smugglers of Pakistani origin on suspicion of misleading the migrants during the raid on the European side of the city.

The migrants had reportedly hoped to reach Europe via Greece or Italy, giving a code to the smugglers to access the money upon reaching Europe, Hurriyet said.

However, the people-smuggling gang mainly made up of Pakistanis demanded the $10,000 upfront and told the migrants chained in Istanbul to call their families to tell them they had reached Europe already and to transfer the money, the daily said.

Hundreds of thousands of migrants including Syrians, Iraqis, Pakistanis and Afghans have entered Europe in recent years.

At the height of the refugee crisis in 2015, over a million migrants arrived in Europe by sea, though the numbers have declined since a 2016 deal between Turkey and the European Union.