President Mamnoon calls for dialogue between countries in the region

President Mamnoon calls for dialogue between countries in the region 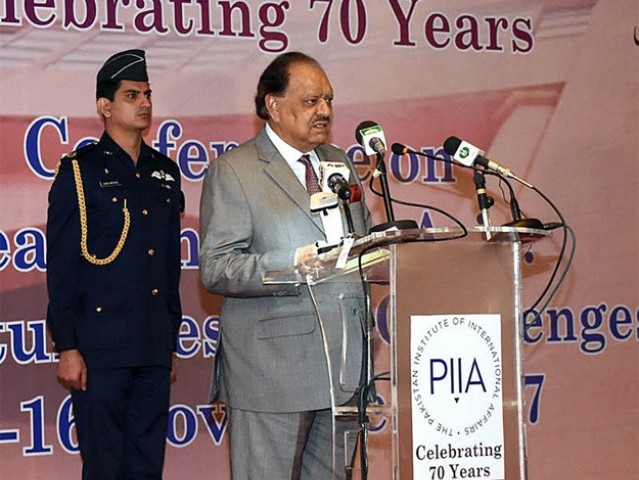 KARACHI: The current policies of the United States of America for South Asia can disrupt peace in the region.

President of Pakistan Mamnoon Hussain said this while addressing a seminar, ‘Peace in South Asia’, organised by the Pakistan Institute of International Affairs (PIIA) in Karachi on Wednesday. “America is attempting to give an important role to India, which could endanger the stability in this region,” President Hussain said.

He added that unresolved disputes of Siachen, Sir Creek and Kashmir were major factors for instability in the region. The people of occupied Kashmir had been struggling peacefully for their independence and India, which called them terrorists, had broken records of atrocities against them, President Hussain maintained.  “India is crushing the peaceful movement and will add further to the chaos,” he said.

Diverting the attention of participants towards the arms race in the region, President Hussain said that due to the prevailing tension between India and Pakistan, both countries’ prime agenda is to acquire more arms and gather military strength rather than prioritising the improvement of their socio-economic condition. President Mamnoon was of the view that citizens of both the countries suffered due to the arms race. He added that the strategic scenario of South Asia had become very complex since India and Pakistan became nuclear powers.

Peace in South Asia has become a dream, President Hussain said. However, he expressed hope that “the regional countries, with cooperation and understanding, can resolve their issues”.

He added that international projects and interventions like the One Belt One Road, China-Pakistan Economic Corridor and Asian Infrastructure Investment Bank could play vital role in bridging differences between Pakistan and India. He also stressed the need for bringing peace and stability in Afghanistan. “A peaceful Afghanistan can play the role to connect Central Asia, South Asia and East Asia,” he said, requesting the international community to come forward and play their role for peace in Afghanistan.  President Hussain also called for an active role of the South Asian Association for Regional Cooperation to achieve these objectives.

He suggested that South Asian countries should also form an alliance like Association of Southeast Asian Nations and Shanghai Cooperation Organisation for regional cooperation and sustainable development.  “Instead of indulging in conflict and war, we should extend cooperation and resolve issues amicably through dialogue,” he summed up.