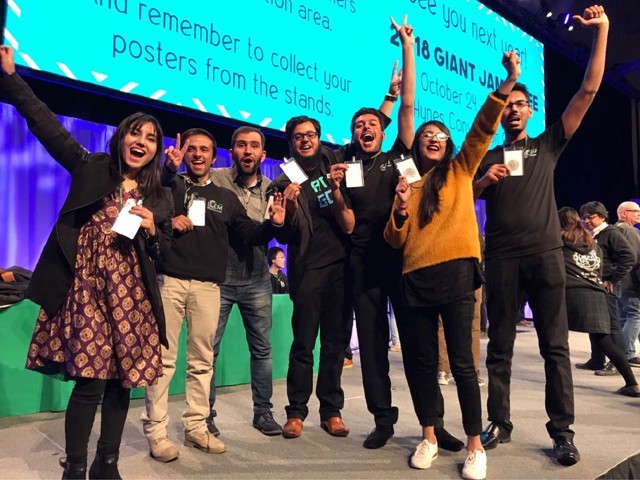 The iGEM Peshawar team developed a fish called ‘Reporter Fish’ by building DNA circuits. ‘Reporter Fish’ is able to detect metal contaminated water by changing the colour of its body to alarm those who are part of the fishing business. iGEM Peshawar 2017 was also nominated for the Best Biosafety Award at the competition, according to the official press release.

The team’s success was confirmed to The Express Tribune by Liaison Coordinator CECOS University Sohaib Tanveer. They also made the announcement on their official Facebook page.

The team comprising two girls and 10 boys left for Boston last week to compete in the international competition related to synthetic biology. The team was hosted by Institute of Integrative Biosciences of CECOS University of IT and Emerging Sciences Peshawar and supported by Khyber-Pakhtunkhwa (KP)’s Directorate of Science and Technology.

Congratulations #TeamPeshawar. Proud of @igem_peshawar who has won a SILVER MEDAL in the International Genetically Engineered Competition bringing pride for whole country. From bronze to silver, we are looking forward for the Gold next time. Good Job.

“The project will have a direct impact on fish farmers and will also help to keep the fish with good health for consumption by human beings,” Dr Faisal Khan, who heads the CECOS’s Biosciences lab and supervised the team, told The Express Tribune.

The details of the project shared with The Express Tribune stated that the team is comprised of young scientists from the computer science and engineering disciplines from various areas including Lahore, Attock, Islamabad, Multan, Faisalabad, Khyber Agency, Nowshera, Charsadda, Peshawar, Swabi and Mardan.

Congrats to all the brilliant young scientists. pic.twitter.com/FHLZy4GyuZ

For alarming fish farmers, the team also designed and developed a digital interface for the sensor system of the project. A digital senses system will alarm the fish farmer through a mobile text message if any contaminated water has been detected.

“Being the only electrical engineer in the team working with the undergrad biologists of Pakistan was good a experience,” Omer Zeb from Swabi told The Express Tribune from Boston. He said it was a proud moment for the Pakistani team to win a silver medal among the 90 plus projects featured in the competition.

Another member of the team, Hassan Raza, belonging to Faisalabad said the project would help in combating the serious environmental issues of water contamination the world is experiencing.

“Winning the silver medal reflects that Pakistanis have ideas of fixing issues through bio synthetic ways. But they need to be supported by the government,” Raza said.

Ayesha Khan from Nowshera told The Express Tribune that being part of iGEM has not only given her the opportunity to learn and apply cutting edge technology but would also help the Pakistani community learn about water issues.

The iGEM Competition is the premiere student team competition in Synthetic Biology. For over 10 years, iGEM has been encouraging students to work together to solve real-world challenges by building genetically engineered biological systems with standard, interchangeable parts. Student teams design, build and test their projects over the summer and gather to present their work and compete at the annual Jamboree.