Member­s of Hariri's own Al-Mousta­qbal party said they had no inform­ation on his fate
Published: November 12, 2017
Tweet Email 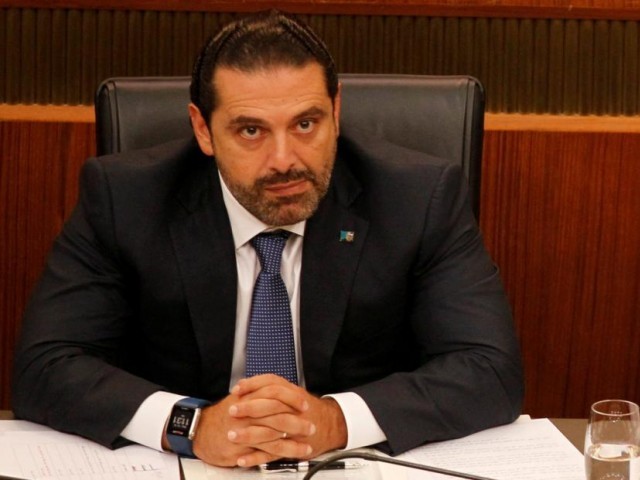 Lebanon’s president urged Saudi Arabia on Saturday to explain why Saad Hariri had not returned to Beirut since his surprise resignation as prime minister a week ago.

Hariri announced on November 4 in a televised statement from Riyadh that he would be stepping down from the post, sending shock waves through Lebanese politics. The premier has yet to return to Lebanon and rumours have swirled that he is being held in Saudi Arabia against his will.

President Michel Aoun on Saturday called on the kingdom to “clarify the reasons that have prevented the return of PM Hariri to Lebanon to be among his people and supporters”.

“The obscurity surrounding the condition of PM Saad Hariri since his resignation a week ago means that all positions and actions declared by him or attributed to him do not reflect the truth,” Aoun added. “They are instead a result of the ambiguous and obscure conditions [under which] PM Hariri is living in the Kingdom of Saudi Arabia.”

Aoun on Saturday spoke by phone to French President Emmanuel Macron on the “latest developments” around Hariri’s resignation, Lebanon’s presidency said in a statement. The Lebanese head of state has yet to formally accept Hariri’s resignation and has criticised the circumstances surrounding it as ‘unacceptable’.

On Saturday evening, Hariri attended a reception ceremony at the Riyadh airport for Saudi King Salman who had flown back to the capital from the holy city of Medina, Hariri’s media office. The emailed statement said Hariri had earlier met in Riyadh with both the British and Turkish envoys to the kingdom.

In his shock announcement, Hariri accused Iran and its Lebanese ally Hezbollah of taking over his country and destabilising the broader region, saying he feared for his life. His statement prompted fears that Lebanon – dominated by rival camps led by Hariri and Hezbollah – would be caught up in spiralling tensions between Riyadh and Tehran.

Hariri’s week-long absence from Lebanon has sparked rumours that the ex-premier – who also holds Saudi nationality – is under de facto house arrest in the kingdom.

“The head of the Lebanese government is detained in Saudi Arabia, he is banned from returning to Lebanon until now,” Hezbollah chief Hassan Nasrallah said in a televised address Friday.

Members of Hariri’s own Al-Moustaqbal [Future] party said they had no information on his fate.

And Lebanese Foreign Minister Gebran Bassil announced on Friday that he was launching a “diplomatic campaign to bring back the head of our government of his own free will”.

Even world powers have appealed for calm and freedom of movement for Hariri.

US Secretary of State Rex Tillerson on Friday described Hariri as “a strong partner” and warned against “any party, within or outside Lebanon, using Lebanon as a venue for proxy conflicts or in any manner contributing to instability in that country”.

On Friday, a spokesperson for France’s foreign ministry said: “We wish Mr Saad Hariri to have all his freedom of movement and to be fully able to play the essential role that is his in Lebanon.”