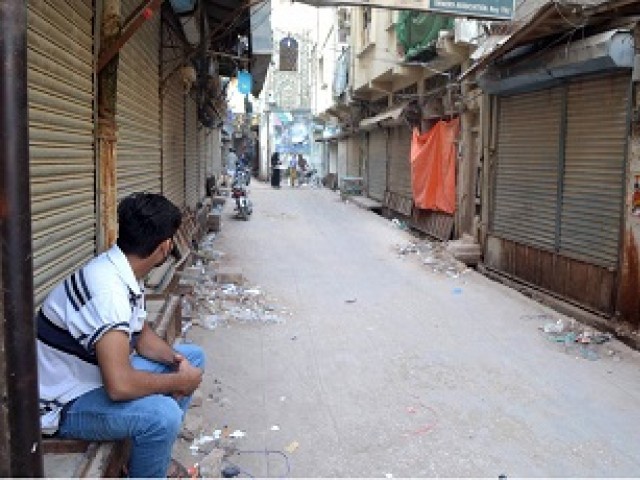 CLOSED FOR BUSINESS: A young man sits outside a closed wholesale drugs and chemist market after the market was sealed in raids on medical stores due to alleged sale of expired drugs in Hyderabad. PHOTO: ONLINE

HYDERABAD: In a rare crackdown on pharmacies exercising poor storage and sale practicesin Hyderabad, the district health department suspended on Tuesday the licences of 14 pharmacies.

The spot checks, carried out on court orders by Deputy Commissioner Muhammad Saleem Rajput, drew pharmacists’ ire, causing them to go on strike and leave citizens with almost no pharmacy to buy medicines.

They shut down on Tuesday hundreds of medical stores and resumed the protest on Wednesday. However, the protest ended after 3pm on Wednesday, when the local associations representing the pharmacies sat in a negotiation meeting with District Health Officer (DHO) Dr Ahmed Haider.

The DHO told The Express Tribune, after a marathon meeting which ended in the evening, that he has given a 15-day deadline to all pharmacies to adhere to the regulations.

“There are a host of violations. They [the proprietors] get licences either in the name of a dispenser or pharmacist but during the checks we found that neither of these qualified persons were present at the shops, which were being run by ordinary and unqualified people.”

The absence of cold storage facilities which exposes medicines to climate temperature, usually far higher than the temperature required for most of the medicines and selling expired drugs and physicians’ samples are among other violations observed during the raids.

Dr Haider said that the pharmacies operating for longer than eight hours a day or up to 16 hours were directed to hire three to four pharmacists and get their names included in their licences.

“After 15 days, we will start sealing the shops and taking proprietors to drug courts,” he claimed.

Meanwhile, a representative of a local association who attended the meeting complained that they argued it is not possible for them to hire several pharmacists at every shop.

Muhammad Sajid, who represented Latifabad taluka where around 225 pharmacies are operating, told The Express Tribune that they will meet health officials again to settle this issue.

“We agreed that there is room for improvement in our work but a sustainable change can’t be brought on such short notice,” Sajid said while referring to the installation of air conditioners to maintain room temperature in shops and the hiring of qualified staff.

The deputy commissioner and health authorities also inspected blood labs and some private hospitals. The DHO said that his office will issue notices to some of these labs and hospitals which have been caught in violation of the regulation.

The Sindh Environmental Protection Agency, which was also part of the raid, is also issuing notices to the labs over poor disposal system.