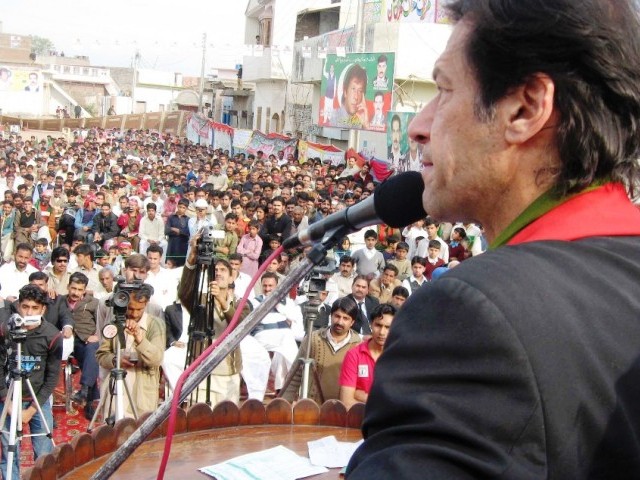 The party called the demonstration to protest over US missile attacks from unmanned drones in lawless tribal areas. PHOTO: INP/FILE

Pakistan Tehreek-i-Insaaf (PTI) Chairman, Imran Khan said on Sunday that if drone strikes inside Pakistan do not stop within 30 days, protesters will block all NATO supply routes across Pakistan.

Khan also warned that protesters will march to Islamabad to force the government to take a stand on the issue if drone strikes continue.

The PTI chairman made the announcement during day two of his party’s sit-in against drone strikes in Peshawar. Thousands of people arrived in the Hayatabad region of Peshawar  for the protest.

The Pak-Afghan road which is the main supply route for the NATO troops in neighbouring Afghanistan was totally blocked and no supplies could be delivered on Sunday.

Updated from print edition below

The government suspended delivery of supplies on Saturday to North Atlantic Treaty Organisation (Nato) troops in Afghanistan via its land border for three days as the Pakistan Tehreek-i-Insaf (PTI) began a sit-in on the supply route over US drone attacks.

PTI supporters gathered on the Ring Road for the planned two-day sit-in aiming to block the route used by supply trucks. Imran Khan, leader of the PTI, called the demonstration to protest US drone attacks in the tribal areas, which many feel infringe on the country’s sovereignty and kill civilians.

Organisers said they expected more than 20,000 people to gather locally for the protest, and many more to arrive in the caravan accompanying Khan. The sit-in will take place at the Bagh-e-Naran Chowk, in the Hayatabad neighbourhood of Peshawar.

At a gathering at Jamia Darul Uloom Haqqania in Akora Khattak, Nowshera – a well-known madrassah – Imran Khan lashed out against US policies in Afghanistan.

“They (the US) are losing the war – they can never win it,” said Khan, while addressing the seminary’s students.

The sit-in is the first public mobilisation campaign against the continuing drone attacks in the tribal districts of the country, where a relentless campaign by the United States military has killed 1,968 people since 2006, according to The Long War Journal, a website maintained by a Washington-based think tank that keeps track of the US military’s campaign against terrorism.

In his speech at the seminary, Khan also spoke out against the current administration in harsh terms, saying that: “Pakistan rulers have sold its citizens’ blood to the United States and its allies in exchange for dollars.”

“Jihad is mandatory and jihad against oppression and injustice will continue,” Khan said.

The protestors say they will spend the night at the site. They claim that they have been joined by hundreds of people from the tribal districts.

US officials said Friday that they are considering providing unmanned drones to Pakistan for aerial surveillance, despite tensions between the two countries over measures to combat terrorist activity.

NATO supply trucks and oil tankers are the targets of frequent attacks blamed on insurgents attempting to disrupt supplies for more than 130,000 international troops fighting in Afghanistan.

Most supplies and equipment required by coalition troops in Afghanistan are shipped through Pakistan, although US troops increasingly use alternative routes through Central Asia. Additional reporting by AFP