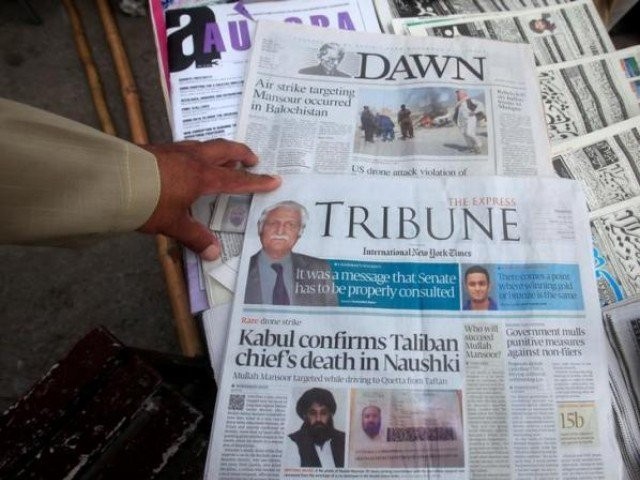 QUETTA: Suspected militants hurled a hand grenade at the press club in Hub, an industrial town on the outskirts of Karachi on Wednesday night amid reports that newspapers could not be delivered throughout Balochistan – including the provincial capital – for the second day in row.

According to police, suspected militants hurled a hand grenade at the Hub Press Club, which landed near the peripheral wall of the compound. The wall was damaged, while windows of the building were shattered by the thud of the blast, but no one was injured.

Security forces rushed to the site and started investigation.

Newspapers not delivered in Quetta, other towns amid threats from militants

Meanwhile, local and national newspapers could not be distributed for a second consecutive day on Wednesday in Quetta and elsewhere in Balochistan.

The Anjuman-e-Akhbar Froshan asked the publishers on Tuesday night not to send their newspapers to the market as hawkers were not willing to distribute the dailies in Quetta and its outskirts.

Similarly, transporters have also refused to deliver newspapers to other districts of Balochistan amid threats from Baloch terrorist groups. The newspapers market remained closed throughout the day on Wednesday as no agent and hawker turned up.

The Anjuman-e-Akhbar Froshan said their hawkers would not distribute newspapers unless their security was ensured.

Alarmed by the situation, the provincial administration has ordered deployment of paramilitary troops at the media houses and newspaper market following threats from proscribed terrorist groups that accuse the media of being biased against them.

The provincial police chief, Moazzam Jah Ansari, also convened a high-level meeting on the orders of Chief Minister Sanaullah Zehri on Wednesday to review the situation created by threats to newspapers.

The meeting pored over suggestions regarding provision of security to the media houses, press clubs, offices of newspapers, newspaper market and journalists. The police chief said that they would ensure safety and security of the media houses and media persons at all costs.