ISLAMABAD: The US Secretary of State Rex Tillerson on Tuesday pressed Pakistan to speed up its efforts against terrorism but described Islamabad as ‘incredibly important’ player to deal with some of the pressing challenges facing the region.

On his maiden visit to Islamabad, Secretary Tillerson – while renewing the US demand seeking action against Afghan Taliban and the Haqqani network – said many of the solutions to the regional challenges have to be found in Pakistan in a statement that underlines the importance of Islamabad in the Trump administration’s new strategy for Afghanistan and South Asia.

“And many of the solutions to the regional challenges are – have to be found here as well in dealing with the leadership in Pakistan, and so we’re here to have further discussions about that,” he added.

During the talks, the US official demanded Pakistan must increase its efforts to eradicate militants and terrorists operating within the country, a telling message he delivered to the country’s civil and military leadership.

The agenda was wide ranging covering bilateral issues, war on terror, Afghanistan and wider regional matters. Unlike the past, Tillerson did not interact with the media in a move that suggests that he did not want to face tough questions.

In a 30-second video, released by the PM office, Tillerson could be heard telling the prime minister that Pakistan is “so important regionally to our joint goals of providing peace and security to the region and providing opportunity for greater economic relationship.”

In return Abbasi said Pakistan is committed in the war against terror.

“We have produced results and we are looking forward to moving ahead with the US and building a tremendous relationship,” the premier said.

But tough discussions took place behind the cameras where the two sides expressed their views in a candid and frank manner, officials familiar with the closed door huddle told The Express Tribune.

Pakistan, according to those officials, presented its own grievances ranging from undermining its anti-terror efforts to giving India a greater role in Afghanistan. The secretary of state was informed in categorical terms that India could only play the role of a spoiler in Afghanistan.

The statement issued by the US Embassy gave some hint about what exactly transpired in Tillerson’s talks with the Pakistani civil and military authorities.

The statement said the secretary reiterated President Trump’s message that Pakistan must increase its efforts to eradicate militants and terrorists operating within the country.

“To address those concerns, the Secretary outlined the United States’ new South Asia Strategy and the vital role that Pakistan can play in working with the United States and others to facilitate a peace process in Afghanistan that can bring stability and security to the region,” the statement added.

In his policy speech on August 21, Trump accused Pakistan of supporting agents of ‘chaos and violence.’ He also alleged that Pakistan was supporting Afghan Taliban and the Haqqani network. But Trump warned that Pakistan had to change this approach immediately.

Islamabad always denies the charge and insists that it cannot be made scapegoat for the failures in Afghanistan. It is also not happy with the Trump administration for undermining the country’s enormous sacrifices in the fight against terrorism. 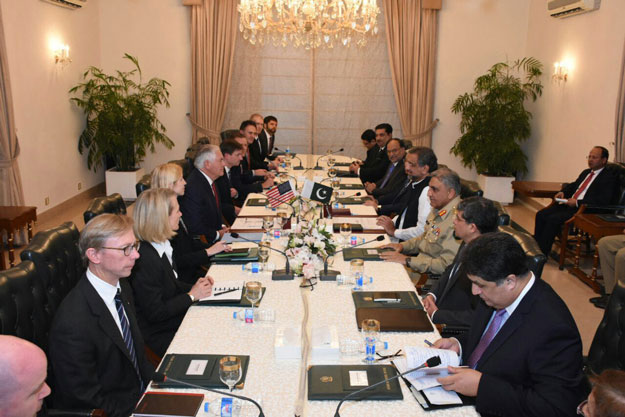 While Tillerson reiterated the demand from Pakistan to do more, he attempted to placate Islamabad by suggesting that “the US share common interests in establishing a stable, peaceful Afghanistan, defeating ISIS in South Asia, and eliminating terrorist groups that threaten both Pakistan and the US.”

In all meetings with Pakistan’s leaders, the secretary expressed appreciation for Pakistan’s sacrifices in the fight against terror.  He also expressed gratitude to the government of Pakistan and the Pakistani Army for their cooperation in securing release of the Boyle-Coleman family from captivity.

The separate statement issued by the PM office gave a positive spin to talks between Secretary Tillerson and civil and military leadership as it did not talk about the US demand, seeking specific action against certain militant groups.

It said Tillerson’s visit was a follow-up to the meeting between the prime minister and the US Vice President Mike Pence in New York in September in which the two sides agreed to resume full scale engagements between the two Governments.

The PM underlined the importance of high level engagements between the two countries and expressed satisfaction on the progress made during these interactions in recent months.

The US delegation was informed that progress in promoting peace and stability in the region was linked to the resolution of the Jammu & Kashmir dispute. The ongoing grave violations of human rights by Indian occupation forces in Indian occupied Jammu & Kashmir were highlighted.

The delegation was also informed of the ongoing efforts on securing the Pak-Afghan border out of national resources. The two sides agreed to build upon the understandings reached in the dialogue process and to continue the pace and scope of high level engagements in future.