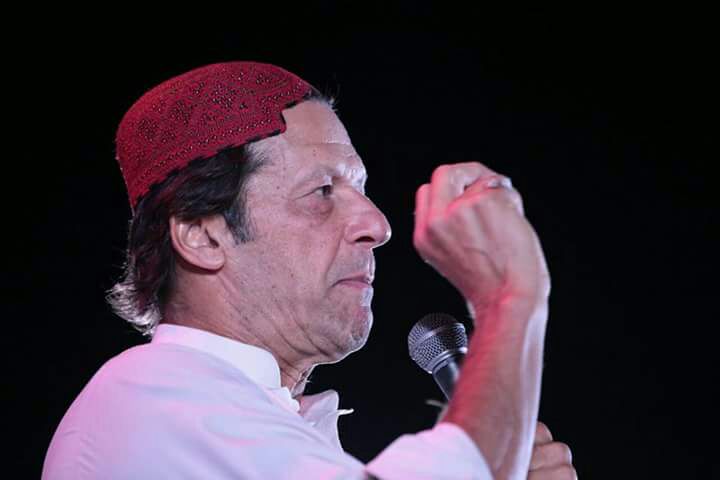 HYDERABAD: In his second public meeting in Sindh in less than five weeks, a seemingly buoyed Imran Khan promised assertively that Pakistan Tehreek-e-Insaf’s envisioned change is in the offing. That change, however, “will only come after the incumbent rulers at the Centre, Punjab, and Sindh are shown the door and held accountable for their corruption”, he asserted.

Sindh government is the most corrupt, claims Imran

Speaking to a charged crowd at his party’s public meeting in Sehwan on Sunday, he alleged that Zardari and Talpur are buying off politically influential people and enlist support by means of threats and harassment. “They work like gangsters.”

Khan demanded that the joint investigation team’s report on Lyari gangster Uzair Baloch’s case should be made public. He claimed that Baloch disclosed to interrogators that he killed people and gained control of 14 sugar mills along with MPA Owais Muzaffar alias Tappi by forcing their owners to sell them. According to Khan, Baloch even harassed the owners of houses around Bilawal House in Karachi to compel them to sell their properties cheaply. “Baloch disclosed that he used to pay Rs10 million a month to Faryal Talpur from his extortion income.”

The PTI leader challenged Zardari and Talpur to sue him in the court of law if they believe that his statements are false, adding that if the siblings opted for the court, he will get a chance to expose them for what they are.

He accused the PPP leaders of creating a reign of fear in Sindh by using the police to threaten their opponents and detractors by lodging fake cases against them.

Khan complained about the bureaucratic obstacles PTI is confronted with whenever they try to organise public meetings in Sindh. He specifically mentioned Sukkur and Sehwan, where the PTI was denied access to their requested venues for events.

“Why are you so afraid of us?” he asked while offering PPP co-chairman Bilawal Bhutto Zardari, who spoke at a public meeting in Peshawar on Sunday, that he could hold rallies in any city of Khyber-Pakhtunkhwa with complete official assistance. “All our stadiums in K-P are available for you.”

PTI to oust PPP even from Sindh: Qureshi

The PTI chief declared that his party will not accept replacement of the ‘older Sharif’ with the ‘younger Sharif’ at the party’s helm and demanded the reopening of the Hudaibya Paper Mills case against Shehbaz. Referring to the recent Supreme Court order to reinvestigate the mill case, he accused the Punjab CM of laundering ill-gotten money from the mills. “No corrupt politician can be tolerated now. We can’t give another NRO [National Reconciliation Ordinance] to any corrupt politician [because] the last NRO already damaged Pakistan a lot.”

Khan sought reciprocity from the people, promising good governance and development for their electoral support. He held that eradicating corruption and instituting reforms to help the poor will be guiding principles of his party if it comes to power.

He claimed PTI’s provincial government has decreased poverty in K-P by 50% in the last four years while referring to numbers from a Federal Bureau of Statistics report.

He claimed that 60% of poor families in K-P have been given the health insurance cards while the remaining will receive the card within a year. “We have learned and will keep learning from China, which lifted 700 million people out of poverty in 30 years. We will lift 100 million people of Pakistan from that state.”

He told the supporters about health, education, energy sector and policing reforms which have been undertaken in K-P and promised to introduce same measures in Sindh if elected to power. Khan also pledged to plant one billion trees in each province of Pakistan after coming to power. “It is my promise to you. We have to turn Pakistan green. We will clean the rivers, lakes, and environment.”

He asked why the terrorists involved in the attack on Hazrat Lal Shahbaz Qalandar’s shrine have not been arrested, why Manchar Lake remained polluted, and why Gorakh Hill was neglected as a tourist spot.

“[In Sindh] before elections, ordinary voters can be seen in the guest houses of MNAs and MPAs, but, after the elections, only contractors are found there.” He questioned how Sindhi people, with their thousands of years of history, culture, and language, can remain silent and be afraid of responding to the rulers’ cruelties.