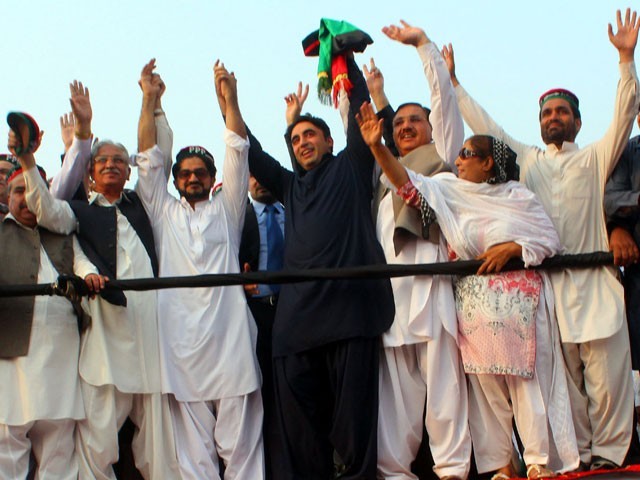 Chairman PPP Bilawal Bhutto pictured prior to his address to the party's supporters in Peshawar on October 22, 2017. PHOTO: INP

“Imran Khan is an anarchist. He is still waiting for the umpire’s finger to rise so that he starts dancing. Doing politics for the service of the masses has never been his priority but his priority is to shift from Bani Gala to Prime Minister House for which he can cross every limit,” the PPP chief said while addressing a public gathering on Sunday in the Zangali area of Peshawar’s National Assembly constituency NA-4, where by-elections are scheduled for October 26.

“KP’s resources run Imran’s kitchen and Jahangir Tareen’s airplane,” he alleged, adding that despite Khan’s promise of bringing about a change, all the projects initiated by the PTI government were marred by corruption.

Bilawal said members of Khan’s own party had raised the issues of corruption, favouritism and even of ‘Khan’s moral degradation’. The politicians who were considered corrupt by Khan were now around him and all the projects he had started had fallen prey to corruption, while their wealth had multiplied, he said.  “Where is the K-P Ehtesab Commission? Those given the authority to run the commission are the favourites of [Chief Minister] Pervez Khattak,” he alleged. “I challenge the PTI government to show parents who have transferred their children from private to government schools or any government school student who has secured a top position in exams. All the top positions are secured by the students of private schools.”

Bilawal said: “Khan has brought the culture of abusive language to the country’s politics. He is abusing the national leadership for his dubious political aims. Do you people still believe that such a person has the right to lead the country?”

He said that unlike K-P, the PPP government in Sindh had built new hospitals where even heart patients are treated free of cost. Referring to the renaming of the province, he said the PPP had given an identity to the people of K-P for which they had been struggling for 60 years. He promised that the Benazir Income Support Programme would be expanded to provide financial relief to more people. He said that through the 18th Amendment, the provinces had been given more authority to use their resources for their own development.

“His change is just a big lie. He has no manifesto and no political ideology,” Bilawal said about the PTI chief. “Where was Imran Khan when the Taliban were killing people and destroying our schools. Khan called them brothers and also called for opening an office for them.”

Bilawal said that Pakistan Muslim League-N’s federal government was responsible for the economic woes of the country, while former prime minister Nawaz Sharif was trying to deceive people about his achievements. “Sharif has very good propaganda skills and is spending a huge amount from the country’s resources on it.” People were craving for progress, he said.

“During the past four years, the PML-N and PTI have brought the country to a new low level. They have destroyed the country’s economy,” Bilawal said.

NA-4 is considered one of the most under-developed constituencies of Peshawar district. The seat fell vacant after the death of Gulzar Khan, a disgruntled MNA of the PTI. His son Asad Gulzar is contesting the by-elections on a PPP ticket. He said in his address to the party’s supporters that 22,000 acres in the constituency were barren and steps were needed to cultivate the land. He said the area had been badly affected by militancy but compensation had not been paid to the victims.