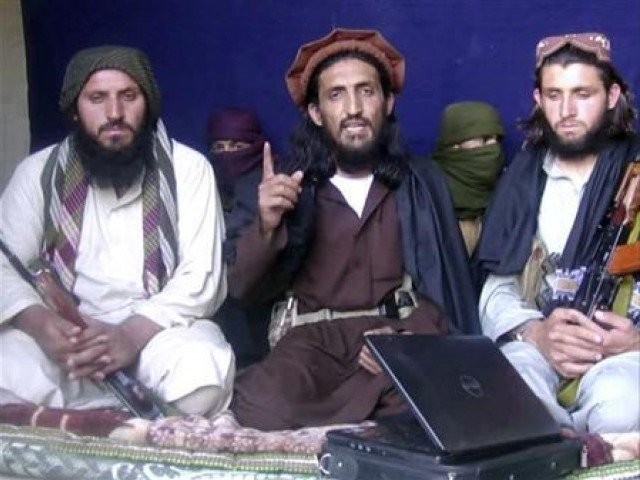 PESHAWAR: The chief of an offshoot of the outlawed Tehreek-e-Taliban Pakistan (TTP) has been killed in a US drone strike, a spokesman for the group said on Thursday.

Jamaat-ul-Ahrar (JuA) had claimed responsibility for many deadly attacks in the country, including a suicide bombing in a park in Lahore on Easter Sunday last year that killed 75 people including many children.

“Chief of our Jamaat-ul-Ahrar Umar Khalid Khorasani, who sustained serious injuries in a recent US drone strike in Afghanistan’s Paktia province, succumbed to his injuries on Wednesday evening,” JuA spokesman Asad Mansoor told AFP by telephone from an undisclosed location.

“At least nine close associates of Khorasani were also killed in the strike,” he added.

Two US drone strikes on Monday along the border between Afghanistan and Pakistan killed at least 26 people — including fighters from the Haqqani network which is allied to the Afghan Taliban.

Monday’s drone strikes came days after Canadian hostage Joshua Boyle and his American wife and three children were freed in Pakistan after five years of captivity at the hands of the Afghan militants network.

Mansoor, the spokesman, said a high-level meeting of JuA’s consultative council will be convened soon to appoint the outfit’s new chief.

However, an important Taliban commander said on condition of anonymity that one of JuA’s senior commanders, Asad Afridi, has already been appointed new JuA chief.

JuA pledged allegiance to IS in 2014, but a year later said it had re-joined the TTP – which in turn is allied to al Qaeda, a foe of IS.

However since 2016, JuA and IS have both laid claim to several attacks, notably a suicide bombing at a hospital in Quetta last year that killed 73 people. 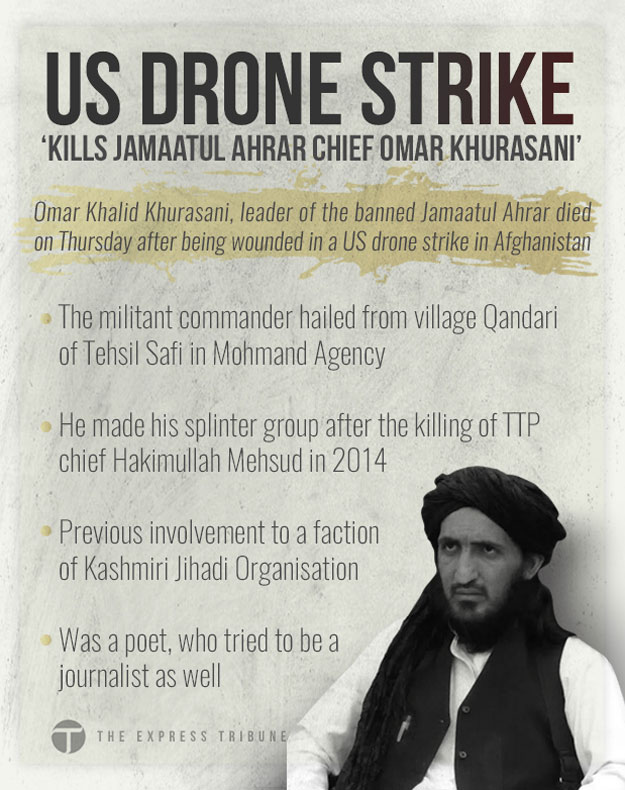 The joint claims raised the possibility the two outfits were colluding, or that JuA, which has foot soldiers on the ground, was allowing IS also to take credit to achieve propaganda goals.

Analysts said Khorasani’s death suggested resumption of intelligence sharing and coordination between Pakistan and the US.

“It shows America’s willingness to redress Pakistan’s complaints about presence of militant safe havens on Afghan soil,” he said. “Both countries now seem to be back to their business.”

Khorasani had a background that reads like a history of Pakistani militancy. Born Abdul Wali in a village called Lakaro in the Mohmand tribal region, Khorasani started out as an anti-India jihadist fighting in Kashmir, according to a long-time friend who spoke last year to Reuters on condition of anonymity.

He later joined TTP in 2007 to fight the government to establish strict sharia Islamic law. In 2014, Khorasani left TTP after a leadership quarrel to form Jamaat-ul-Ahrar.

JuA gained attention in September 2014 when it announced it was supporting IS and rejecting the main TTP leadership.

By March 2015, however, the group was again swearing loyalty to the main TTP umbrella leadership. Still, JuA never specifically disavowed IS either, and several attacks inside Pakistan have been claimed by both groups.

The United States last year designated JuA as a terrorist group. Khorasani had previously been seriously wounded in a Nato air strike in eastern Afghanistan in 2015 but later recovered.