Texas to execute 'tourniquet killer' for serial rape and murder

PTI MNA Arif Alvi, who is also a PAC member, wrote a letter to Leader of the Opposition in the National Assembly Khursheed Shah, the committee's chairman, on Wednesday drawing his attention to a media report according to which the auditor general of Pakistan (AGP) had found irregularities worth Rs470 billion in the awarding of many road projects by the NHA, including some initiated under CPEC.

Dhabeji zone attracts investors ahead of inclusion in CPEC

As per the media report, the AGP found 52 cases in NHA’s accounts for the year 2016-17 where "irregular awarding of contracts, violations of Public Procurement Regulatory Authority rules and unauthorised expenditures were observed".


The report also mentioned that the auditors had found "something fishy in the award of a Rs294.352 billion contract for the Sukkur-Multan section of the motorway, awarded to the China State Construction Engineering Corporation".

Its cost was "estimated by the CSCEC at Rs240.158 billion but was awarded to the same firm at higher rates".

Alvi requested Shah to urgently call a meeting of the committee on the issue as gross violations leading to massive corruption... actually 'plunder', is evident in these transactions." 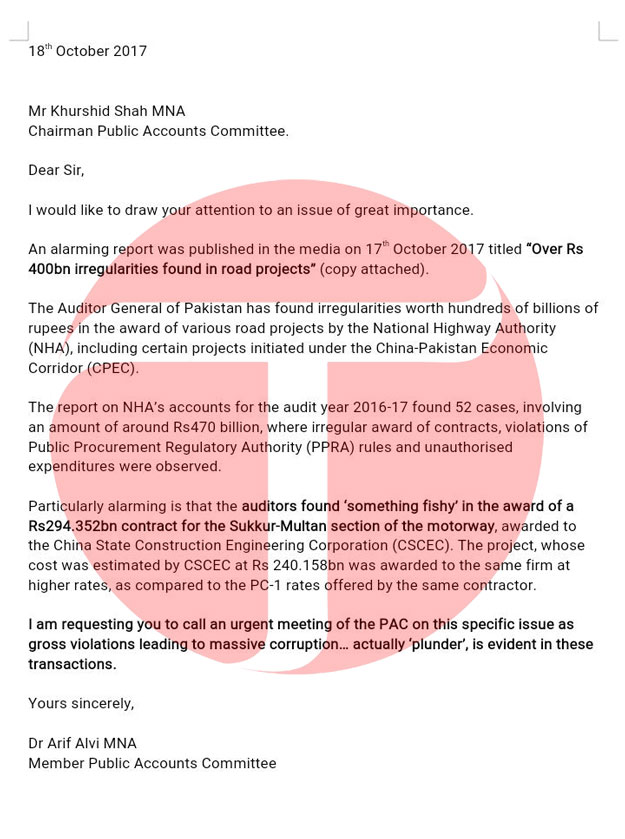 Aamer | 4 years ago | Reply Procurment procedures were violated on FWO's pressure through GHQ, their arm twisting methods not only resulted in the loss of revenue but also the quality of the roads being built are extremely poor. The M9 motorway which is still under construction has started to wear out from areas which were inaugurated just a few months ago.
Replying to X
Saved ! Your comment will be displayed after the approval.
Error !
Error! Invalid Email.