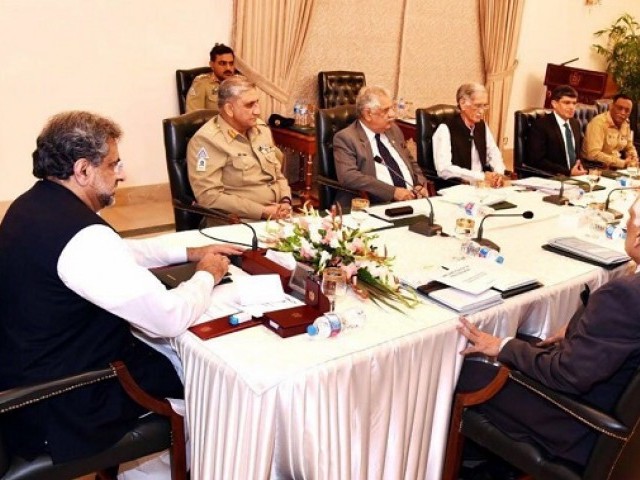 ISLAMABAD: The civilian top brass on Tuesday briefed Chief of the Army Staff General Qamar Javed Bajwa on the state of the economy to address the military’s concerns over “sky-high debts” and “growing external imbalances”.

The army chief was also given a briefing on the “real picture” of the China-Pakistan Economic Corridor (CPEC) and its intended benefits for the country, according to officials privy to the meeting. Gen Bajwa was also informed in details about external sector problems, said the officials.

The meeting was held about a week after the army chief publically expressed concern about the country’s debts. He had also called for broadening of the extremely low tax base and bringing in financial discipline to break the “begging bowl”.

After the army chief’s public address at a seminar organised to highlight the interlink between security and the economy, the director general of Inter-Services Public Relations also said that if the economy was not bad, it was not good either, inviting a strong reaction from Interior Minister Ahsan Iqbal, who also holds the charge of planning minister.

It seems the government moved quickly to control the damage caused by Iqbal’s response to the military’s position on the economy. On Monday, Dar also tried to clarify the economic situation and urged commenters to take a holistic, rather than an isolated view, of the public debt position.

Prime Minister’s spokesman Dr Musadiq Malik was approached for comment on whether the military and the civilian leadership came on the same page after the briefing, but he had not responded till the time this story was filed.

The officials said the COAS was informed that recent external economic pressures were because the economy was in an expansionary phase. It was explained that these pressures would remain there for at least a couple of years. The government was of the view that energy and infrastructure bottlenecks had to be removed for achieving a sustained economic growth rate of 6% or more.

Pakistan’s current account deficit was $12.1 billion in the last fiscal year due to its highest-ever trade deficit of $32.4 billion. The country’s gross public debt has also swelled to 67.2% of the total national output, which is well above the threshold prescribed for developing countries.

The officials said that the military leadership was given a realistic picture of CPEC, its financial burden, and the long-term prospects for the economy. The secretary planning gave this briefing.

The meeting was held on a day when a Chinese delegation was in the town to prepare a roadmap for setting up prioritised special economic zones (SEZ) in Pakistan under the CPEC framework.

While speaking at a dinner hosted in the honour of the Chinese delegation, Iqbal said that Pakistan lacked experience in setting up SEZs and could overcome these deficiencies by learning from the Chinese experience.

He hoped that the provinces would complete their feasibility studies before the 7th Joint Cooperation Committee meeting that would take place on November 21. The JCC is the policymaking body for CPEC.

Iqbal said that the ownership of the special economic zones rested with the provinces and they enjoyed the freedom to take their own decisions.

Answering a question, Iqbal said that Dar had managed the economy well and he would stay at the helm of the affairs. He credited Dar with restoring the confidence of international donors and foreign investors in the economy. The government could not afford to change the finance minister at this time, he added.

Dar was recently indicted by an accountability court on charges of corruption, prompting the opposition parties to demand his resignation.

Iqbal also said that no government would seek a bailout package from the International Monetary Fund just months before scheduled general election.