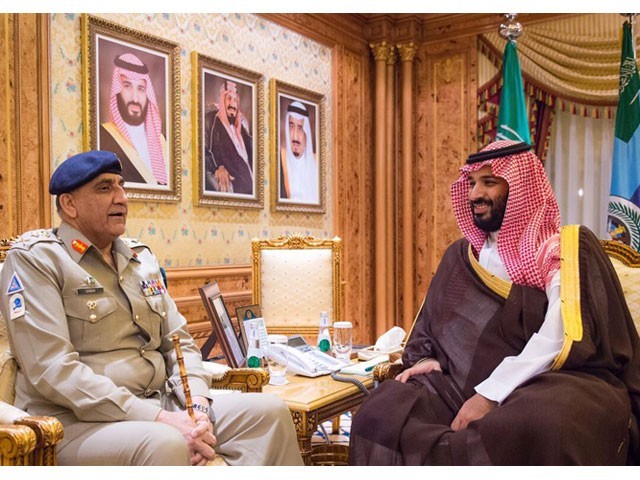 The visit is particularly interesting as the military’s media wing, the ISPR, has issued no formal statement to the media.

During the Riyadh meeting, Gen Qamar and Prince Salman discussed bilateral issues, with special emphasis on military-to-military relations. Attendees at the meeting included senior Saudi officials, according to the SPA.

On Monday, Gen Qamar arrived in Riyadh where he was received by Commander of the Ground Forces Lieutenant General Prince Fahd bin Turki bin Abdulaziz.

On the occasion, the two exchanged views on bilateral ties, especially on the military relations. Prince Turki also hosted a luncheon in honour of the army chief. A number of officials attended the meeting, the report added.

Gen Qamar and Sheikh Mohammed discussed recent regional developments. The Dubai ruler praised the Pakistani community for their constructive role in the development of the state.

Reciprocating, the army chief thanked Sheikh Mohammed for the Emirates’ humanitarian assistance for Pakistani people, and hailed the leadership for the developmental work in Dubai.

Among the attendees were senior military officials, including the chief of armed forces of Dubai.

The unannounced visits come amid a simmering controversy involving the civil and military leaders at home. Last week, Interior Minister Ahsan Iqbal advised the military spokesperson to refrain from commenting on the state of the economy.

The DG said he was disappointed both as a soldier and a Pakistani citizen, followed by Iqbal’s clarification that the remarks were not aimed at any institution.

On October 13, Prime Minister Abbasi had said that a technocrat government cannot resolve the issues being faced by the masses.

While the DG ISPR, in his address to the media earlier, had made it clear that “democracy has no threats,” this situation has led to speculation that the incumbent government may have to exit prematurely.