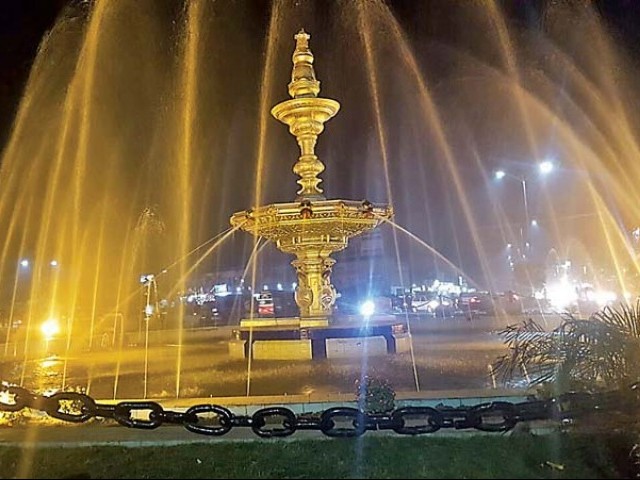 Water splashes out of the fountain in Bahawalpur. PHOTO: EXPRESS

MULTAN: The Parks and Horticulture Authority (PHA) decided to outsource eight fountains along the metro route.

The move will be initiated from October 28, PHA Spokesman Jalaluddin said. Jalaluddin said there were total nine fountains along the Metro route out of which eight had been decided to be outsourced to private parties, while one fountain at Chungi No 9 was being operated by the Metro administration.

He said the private parties would be responsible for payment of electricity bills, maintenance and other expenses.

The spokesman said the PHA administration had also decided to put scrap of Qasim Fort Park and Shah Shams Park on auction. However, he maintained a committee of the PHA was busy in examining the material quality while auction date would be announced soon.

Jalaluddin said the PHA had already auctioned four towns to private parties for recovery of publicity fee. He said a requisition had been sent to the head office for approval of funds for five parks, including K-Block Park, Shah Rukan-e-Alam, Kabootar Mandi Park and Dhobi Ghat Park.

He added after receiving funds, rehabilitation work would commence in these parks.