Senato­r Mushah­idulla­h Khan says Sharif will not come back till the next court hearin­g schedu­led for Octobe­r 9
By Our Correspondent / Shahbaz Rana
Published: October 6, 2017
Tweet Email 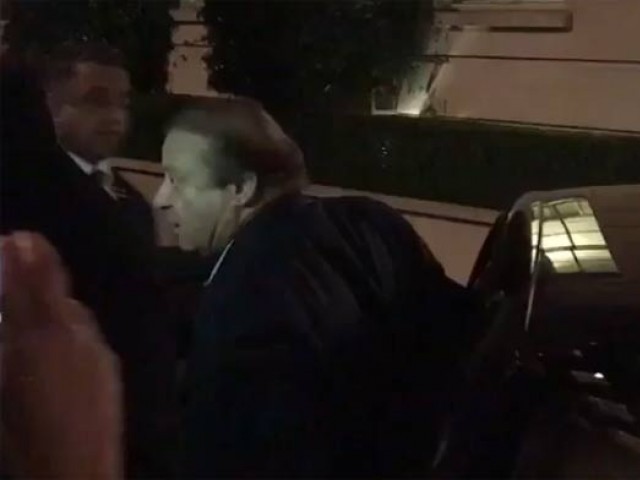 Senator Mushahidullah Khan says Sharif will not come back till the next court hearing scheduled for October 9. PHOTO: TWITTER

ISLAMABAD / ISLAMABAD / LAHORE: Ousted prime minister Nawaz Sharif on Thursday left for London on a scheduled trip to see his ailing wife who has been undergoing cancer treatment there.

The trip was scheduled several days ago. However, Pakistan Muslim League-Nawaz (PML-N) leaders refused to confirm details of the trip. In addition, they are also tight-lipped about his expected return to the country.

Senator Mushahidullah Khan told The Express Tribune: “Nawaz Sharif will not come back till the next court hearing scheduled for October 9.”

“He will attend to his ailing wife, who has undergone three surgeries after being diagnosed with Lymphoma (throat cancer) but still not in a stable condition.”

The PML-N leader added his (Sharif’s) return would be dependent entirely on his wife’s health.

Meanwhile, Senator Pervaiz Rashid said the party had not been informed of his expected return. “It will be decided only after Nawaz talks to Kulsoom Nawaz’s doctors and personally views the situation.”

Only then will he decide any tentative date regarding his return, he added.

Rashid said at the moment, all focus was on Kulsoom Nawaz’s health.

The date on the return ticket was reportedly of January 4. However, party sources revealed that if her health improves, Sharif may return in little over a week.

The flight carrying Sharif was delayed for around two hours after a passenger in the flight fell sick.

Sharif returned to the country on September 25 after a long stay in London. The former prime minister was facing three corruption references in an accountability court in Islamabad.

The references were filed by the National Accountability Bureau (NAB) against him and his family members. The accountability court had set October 9 as the date to indict the deposed prime minister and issued arrest warrants for his children during hearing on October 2.

According to some sources, Sharif would not come back by the time of his next hearing.