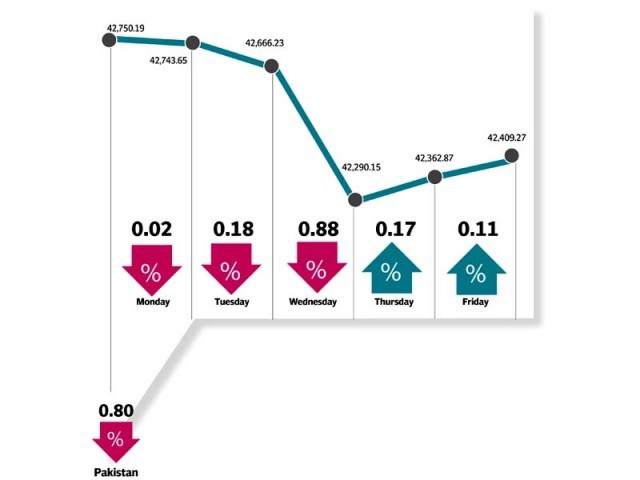 KARACHI: The stock market endured a relatively dull few sessions as the KSE-100 Index declined 0.8% or 341 points in the outgoing week to settle at 42,409 amid lack of triggers.

The week kicked-off on a negative note with the index finishing in the red, amid lacklustre activity. The downward trend continued for two more session, pulling the benchmark index down by 460 points in the first three days. However, things took a turn on Thursday as the five-day losing streak finally ended although activity remained subdued. This pattern continued on Friday, as the index remained directionless due to lack of triggers.

On a monthly basis, the KSE-100 recovered 2.9% in September 2017 after posting a steep fall of 10.4% in August 2017, led by decline in current account deficit to $550 million in August compared to $2.05 billion in July and modest pickup in foreign portfolio flows.

On a quarterly basis, the KSE-100 declined 8.9% in 1QFY18, the worst quarterly performance in 36 quarters or 9 years since Jun 2008/4QFY08, stated a report released by Topline Securities.

Participation remained thin, as average volumes declined 19% to 146 million shares while value traded in the under review period was down 39% to $59 million. This week KEL, BOP, TRG, FFC and EFERT remained the volume leaders.

Among sectors that kept the index under stress were banks, (223 points), cements (165 points) as provisional data for September 2017 suggests a decline of 18% MoM in domestic demand during the month, oil and gas marketing companies (57 points) and insurance (23 points).

On the other hand, sectors that propelled the index forward were; fertilisers (61 points) and oil and gas exploration companies (34 points).

Stock-wise, major laggards were NBP (down 15.3%) due to a possible hit of Rs48 billion in its pension fund case after the Supreme Court dismissed its appeal, HBL (2.3%) too dented the index as it continued to face ill effects of the recently imposed fine by the US regulators. LUCK (5%), ENGRO (3%) and UBL (2%) also dragged the index down.

Foreign buying was recorded at $0.52 million during the week compared to $0.4 million in the previous week.

On the domestic front, net selling was led by banks and individuals worth $10.32 million and $2.04 million, respectively, whereas mutual funds remained major buyers of $6.23 million.

Among major highlights of the week were; OGDC discovered gas in Sindh, reserves declined by $48 million, multinationals repatriated $332.2 million in July-August and defence ministry cleared sale of K-Electric to a Chinese firm.

K-Electric is a Pakistani vertically integrated electric-energy corporation involved in generating, transmitting, and distributing electrical power to over 23 million inhabitants of Karachi.

National Bank of Pakistan is a government owned bank which provides a wide range of banking and financial services to corporate, institutional, commercial, agricultural, industrial, and individual customers throughout Pakistan.