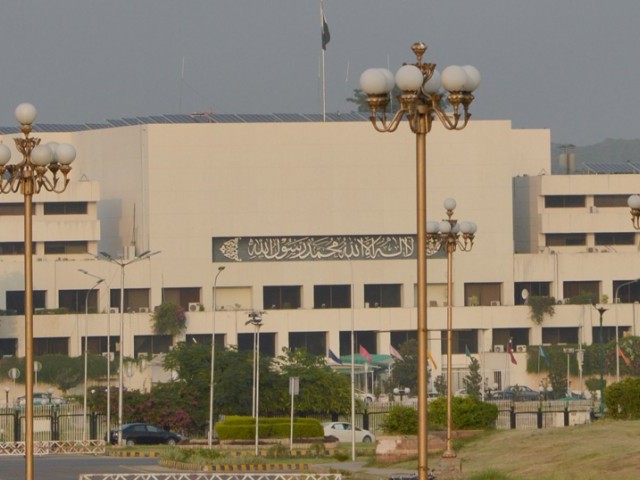 ISLAMABAD: The controversy involving the Intelligence Bureau’s alleged role in abetting deposed prime minister Nawaz Sharif in political affairs deepened on Wednesday after the Pakistan Tehreek-e-Insaf (PTI) decided to take up the matter in parliament.

Besides demanding an immediate resignation from IB chief Aftab Sultan, the PTI in its top leadership huddle said it would move an adjournment motion in the lower house of parliament against him (Sultan) for ‘protecting Sharif’s interests’.

In a statement issued on Wednesday, the party said the appointment of a retired officer as head of the IB was “a clear-cut example of political bribery”.

Sultan — a retired grade 22 officer of the Police Service — was appointed head of the IB in June 2013 and since then he continues to serve against the position on multiple contract extensions granted and approved by the recently deposed premier during his tenure in office.

On September 26, PTI Chairman Imran Khan accused the IB chief of holding a meeting with Nawaz Sharif in London, while on the same day a private television channel had claimed that the IB prepared a list of some 37 PML-N MNAs having alleged links with banned religious and terrorists’ outfits.

“Preparation of this list of the PML-N MNAs is an attempt on behalf of the IB to intimidate parliamentarians in a bid to keep them united under the leadership of Nawaz Sharif through harassment tactics,” the PTI chief was quoted as saying in the meeting.

The IB has categorically denied the allegations and in a statement issued by the agency on Tuesday it stated that “the story [of preparing a list of MNAs] is false, baseless and unfounded”.

The issue was also briefly discussed during a meeting of the Senate Standing Committee on Interior on Wednesday. PML-N Senator Muhammad Javed Abbasi raised the issue with State Minister for Interior Talal Chaudhry.

Chaudhry informed the committee that it was a targeted campaign against one of the country’s prime intelligence agencies (IB), adding the agency had denied preparing or the presence of any such list.

“The list available on social media contains the names of 37 PML-N MNAs and all of them were elected from Punjab during 2013 general elections. Some of them or their family members were even targeted by extremists and militants in the past,” Chaudhry told the committee, adding, “There exists no question of their links with the banned extremist outfits.”

He said Pemra had been asked to take appropriate action against the television channel that aired the unfounded news.

It’s not the first time. In June 2017, the IB was accused of infringing upon privacy and harassing members of the Joint Investigation Team and their families. At that time, the IB had categorically denied the allegations of hacking the Facebook account of a JIT member Bilal Rasool.

However, before the Supreme Court the IB chief in his written response admitted that the agency had collected low-downs of the JIT members, adding it was a regular practice for the agency to collect basic information about the cases of high-profile nature.

“Instead of showing his allegiance to the country, the IB chief has been loyal to the Sharif family,” the statement issued by the PTI added.

“Granting multiple extensions to the IB chief is not only against the interests of the country, but the department he heads,” the PTI said, adding such practices will not be tolerated.

The PTI also demanded that all the accused in the Panamagate case, including the Sharif family, should be put on the Exit Control List.

The party also demanded Finance Minister Ishaq Dar to resign after his indictment in the assets reference case.

The PTI leadership from Lahore and Karachi also participated in the meeting via a telephone link.