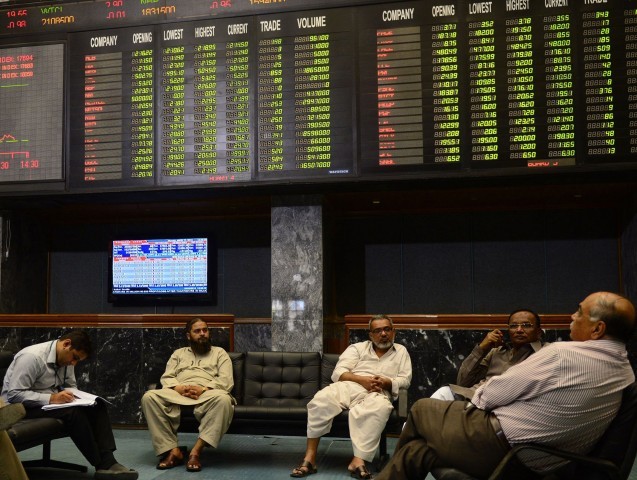 KARACHI: The KSE-100 Index succumbed to political noise on Wednesday, ending negative for the fifth successive session with a minor recovery helping stocks at the end of the session.

The KSE-100 began to drop from the word go and maintained a steady decline throughout the day. After a fall of over 550 points in intra-day trading, investors opted to cherry pick at attractive valuations, helping the KSE-100 finish with a minor recovery.

According to Elixir Securities, Pakistan equities closed lower in another lacklustre session as local politics continued to keep most investors at bay.

“Dismal activity was evident from turnover on benchmark KSE All Index that stood under $52 million, down 35% against this month’s average,” stated Elixir.

“Market opened and traded in the red from the word go as noise on political front due to appearance of country’s finance minister before accountability court on corruption charges and Tuesday’s large foreign institutional selling dented sentiments.

“Most sectors barring fertilisers and select Index names witnessed limited institutional interest and ended in the red. National Bank (NBP PA -5%) closed at the lower limit for the third straight session after adverse decision by apex court in pension liability case; the stock, however, saw good exchange of hands with 2.5 million shares crossing off market at an average price of Rs48/share ie, 8% below previous close.

Meanwhile, Pakistan Oilfields (POL PA -0.4%) notified the exchange after market hours of a hydrocarbon discovery in Attock district; while the size and flow rate has not been disclosed the stock may be in the limelight in the coming sessions.

“We see directionless market trading without any fervour in the near term due to dearth of positive triggers. Locals are expected to closely track foreign institutional activity as any large sell off in the coming days can trigger another round of decline in the market,” the report added. 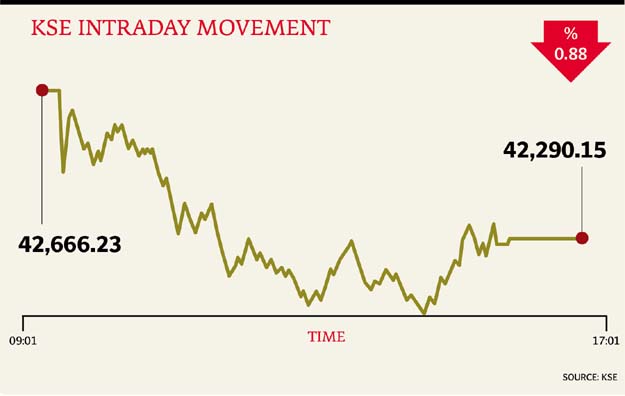 “This selling pressure in the market was likely on the back of investor scepticism regarding ongoing political scenario in the country,” Mulla remarked.

“We believe negativity in the market will continue on the back of political uncertainties and concerning economic indicators. Expecting such volatility, we recommend investors to remain cautious unless economic indicators and prevailing political scenario improve,” he added.

Shares of 382 companies were traded. At the end of the day, 97 stocks closed higher, 264 declined while 21 remained unchanged. The value of shares traded during the day was Rs5.4 billion.

Foreign institutional investors were net buyers of Rs479 million during the trading session, according to data compiled by the National Clearing Company of Pakistan Limited.