Estima­ted 22MGD waste is being dispos­ed into the canal
By Hafeez Tunio
Published: September 26, 2017
Tweet Email 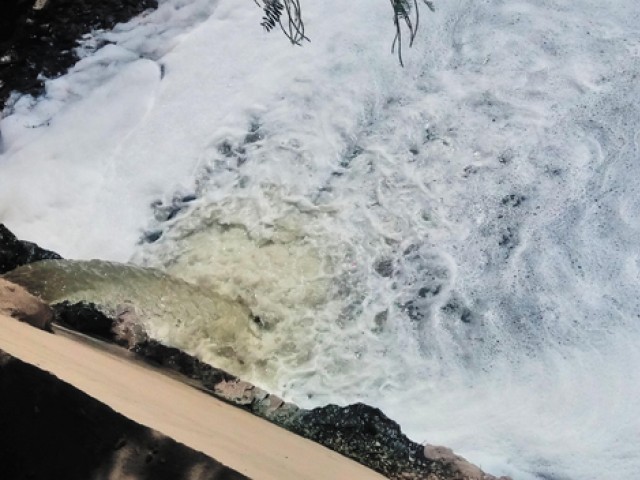 Water in the Rice Canal that runs through Larkana city is no longer potable owing to the disposal of waste in it over the years. PHOTO: COURTESY JAMAL DAWOODPOTO

LARKANA: Around 5,000 years ago, the people of Mohen Jo Daro had an underground sewerage system with proper disposal of solid waste but today we deal with waste by flinging it out into a sweet water canal.

This was stated by Prof Ameer Ali, a teacher of agriculture at Dokri College, who was pointing his finger at Rice Canal, which flows through Larkana city, the hometown of Pakistan Peoples Party (PPP) Founder Zulfikar Ali Bhutto, whose party has been ruling the province for the last nine years.

For many historical and geographical reasons, Larkana is a privileged city. It is located near Mohen Jo Daro, which was the home of the ancient Indus Valley civilisation. The city stands out for its archaeological sites, political history, rich culture and booming agriculture. Among such praise-worthy attributes, there was a stream of sweet drinking water running through the city, called Rice Canal. However, today, water in the canal is no longer potable owing to the disposal of waste in it over the years. People throwing garbage into the canal and buffaloes swimming in it is a frequent sight these days.

“Now, the water [available to the residents] is not fit for human consumption. One of the reasons for this is this contaminated canal whose water also penetrates underground and makes underground water impure. It is causing harmful impact on our health and we all are victims of it,” Prof Ali bemoaned.

Despite spending of billions of rupees under the Larkana package, no solution has been reached to stop waste disposal in the Rice Canal.  According to an estimate, around 22 million gallons per day (MGD) of waste of the city is being disposed in the canal.

Local journalist Hanif Suhaq said not only human waste, but hospital and animal waste is also being released into it. “Whenever we raise this issue before PPP ministers, they blame General (retd) Musharraf’s tenure for the start of this practice. No one tries to stop it,” he said.

Abdul Rasool Abro, a government teacher, has bored around five hand pumps in various locations in Sacchal Colony in order to get freshwater, but all in vain. 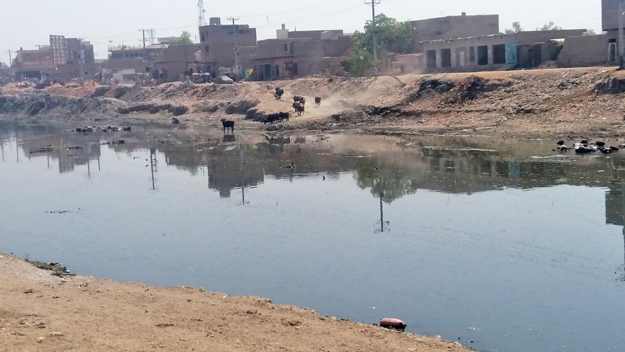 People throwing garbage into the canal and buffaloes swimming in it is a frequent sight these days. PHOTO: COURTESY JAMAL DAWOODPOTO

“The water that poured out of the hand pumps in the summer was not only fresh but also cold. Whether you believe or not, on scorching hot days we were not able to take baths because of its coldness. Now, the water smells whenever we push the hand pump,” Abro said, recalling his childhood days.

“There are 28 pumping stations in the city that release their waste into this canal. Apart from this, the waste of Chandka Teaching Hospital is also being released into the canal without any treatment,” local councillor Khan Muhammad Panhwar said, adding that the Supreme Court’s judicial commission was also informed about the situation and it expressed dismay over it but no tangible result has been seen so far.

In a petition, a resident of Larkana, Bashir Ahmed, has alleged that the PPP government spent around Rs90 billion from 2008 but most of the funds were bungled. “There was a provision to divert the city’s waste somewhere else where the government had to install treatment plants [so that the water could be treated] before its release for agriculture, but the funds were misappropriated,” he claimed, adding that four oxidation plants in the city were set up in late 1990s but all of them are either non-functional or occupied by influential people.

While defending his government, Larkana Municipal Corporation Mayor Mohammad Aslam Shaikh said the waste of 24 pumping stations has been diverted to other stations located outside the city where artificial methods are being used to filter sewage water. “We have set up a few ponds near Aqil, Pir Shah Road, Mahar Wada and Mashori Sharif where using traditional procedure, physical particles are separated and then the water is released for agriculture,” the mayor said, adding that since there was no industrial waste, there was no need for treatment plants.

Deputy Commissioner Kashif Ali Tipu refuted the reports that Rs90 billion was spent in Larkana. “People have exaggerated the figures. The government has hardly spent Rs23 billion in the last nine years,” he said, adding that the entire drainage system of Larkana is being revamped and most of the sewage water is not being released into the Rice Canal.

FIR of medicines’ destruction in fire registered on SHC orders