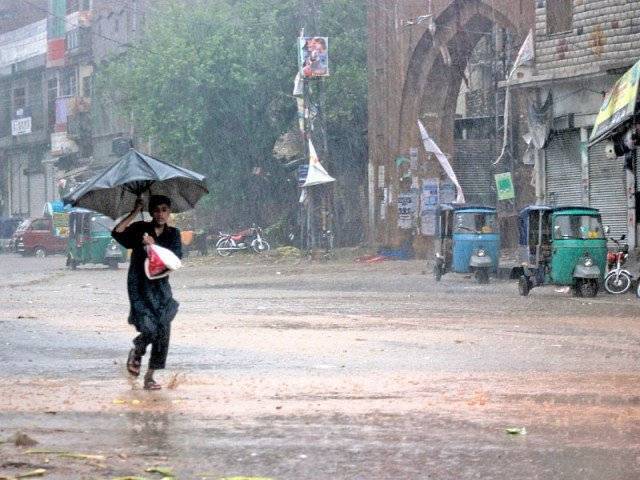 Health experts have cautioned that everyone should take precautionary measures to protect themselves. PHOTO: EXPRESS

ISLAMABAD: After claiming over 120 lives across Pakistan, monsoon season has now entered its weaker phase.  This year Pakistan has received below normal rains during the monsoon season and it is expected that in the coming days the amount and intensity of rainfall will decline further, triggering water scarcity in the country by the end of this year.

According to the National Disaster Management Authority (NDMA) so far 126 people have reportedly been killed, 158 have suffered injuries while 401 houses have been damaged in different rain-related incidents across Pakistan since June 26 to August 17 this year. Out of the total number of people killed, 33 were children and 15 were women.

90 lives lost to rains across Pakistan

He said that this year climate change has had major impact on monsoon season in Pakistan and an opposite trend was witnessed during the last two months.

“Mostly monsoon season gets active in August in Pakistan but this year it was highly active in July and in this month it has entered a weaker phase,” he said.

Sharing the overall progress of monsoon this year he said that during the July 1 and August 15 period rainfall in the country as a whole remained below its normal level.

Meanwhile during the past two weeks, on regional scale, rainfall has been observed below normal over almost all regions except G-B and K-P where it remained above and close to normal respectively, according to the Met office.

He further said that a few spells of rain are expected in the coming days and it might not be enough to accumulate water that will last till the end of the year.

Pre-monsoon rains ‘have killed 43’ in the country

“Last year in September there were not enough rains in Pakistan due to which the country faced severe water crisis which continued till January this year,” said Rasul.

This year no doubt, two main water reservoirs reached their maximum level but now the water inflow in both of these water reservoirs has started declining because temperatures in northern areas have started to drop, he said.

“The stored water will be used in huge quantity for irrigation and power generation, leaving behind little amount to be used for other purposes,” he added.

This year the country has not yet experienced any massive riverine flooding so far.