Accord­ing to NDMA, as many as, 74 people have also been injure­d since the monsoo­n starte­d in the countr­y
By Sehrish Wasif
Published: July 13, 2017
Tweet Email 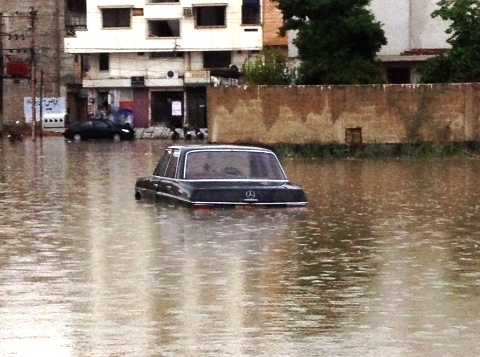 ISLAMABAD: The ongoing monsoon rains across the country claimed thirteen more lives on Wednesday taking the death toll to 60.

As many as 74 people have also been injured in rain-related incidents since the monsoon started in the country while 62 houses have been damaged.

According to the National Disaster Management Authority (NDMA), 13 more fatalities have been reported from across the country during the last 48 hours in different rain-related incidents.

Two others were killed when a vehicle fell into River Indus in Tehsil Kundi Soka Ghazi, District Haripur. Rescue operation is underway to recover the bodies.

Weather alert was issued by the district administration Swabi where twin brothers had drowned in a nearby stream. The DC Swabi issued red alert in Dubyan and distributed tents among the affected people of the village where some 500 families have been shifted to government schools and nearby mosques.

Another person was killed in flash floods in Bajur Agency. Three other people were killed in rain-related incident in K-P.

In Khyber-Pakhtunkhwa and Fata, the total human losses in two days of torrential rains touched the figure of six while 10 people have been injured as well.

According to the latest data, so far 17 deaths have been reported in Balochistan, 14 in Punjab, 13 in Khyber-Pakhtunkhwa, six in Sindh, five in Azad Jammu and Kashmir and four across Fata.

The Pakistan Meteorological Department has predicted heavy rainfall in the country from July 12 and 13, with NDMA directing all concerned departments to remain on a high alert and ensure all precautionary measures.

The meteorological department has also predicted scattered winds, thunderstorm and rains at isolated places over the upper catchments of rivers Jhelum, Chenab, Ravi and Sutlej as well as in Malakand, Hazara, Peshawar, Kohat, Rawalpindi, Sargodha and Gujranwala divisions.

Scattered wind-thundershowers and rains are also expected over DG Khan and Lahore divisions along with Northeast Balochistan. Isolated thunderstorm and rain is expected over Multan and Bahawalpur Divisions.

(ADDITIONAL INPUT FROM OUR CORRESPONDENT IN PESHAWAR)