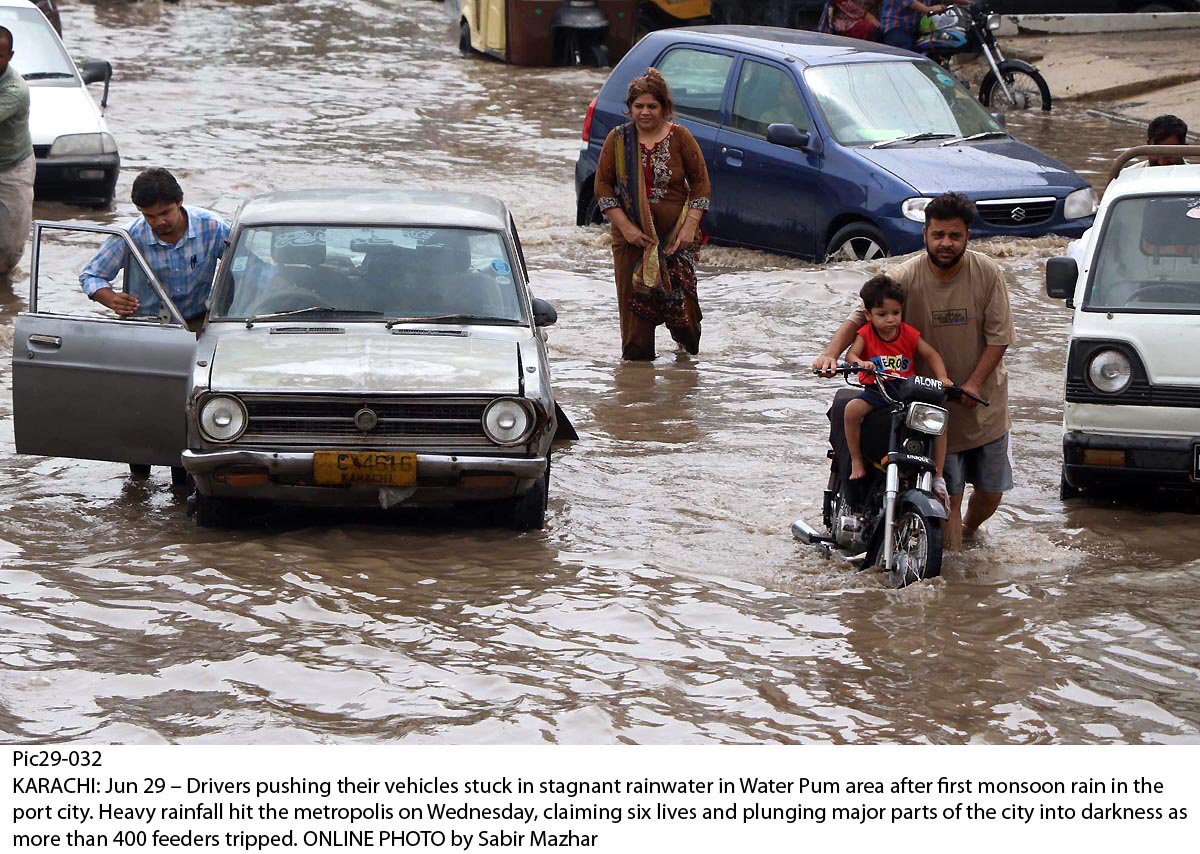 KARACHI: Heavy monsoon downpour may have offered Karachi’ites a brief respite from sweltering heat but opened Pandora’s Box for the megacity, flooding streets and roads with dirty muddy water, causing traffic logjams and plunging most of the city into darkness amid reports of casualties.

The rain, which started on Wednesday, died down during the day on Thursday – only to lash the metropolis more heavily hours later. And if the Meteorological Department forecasts come true, it will continue to rain until Friday evening. 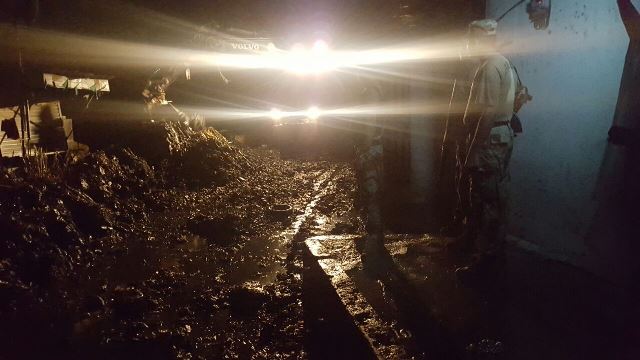 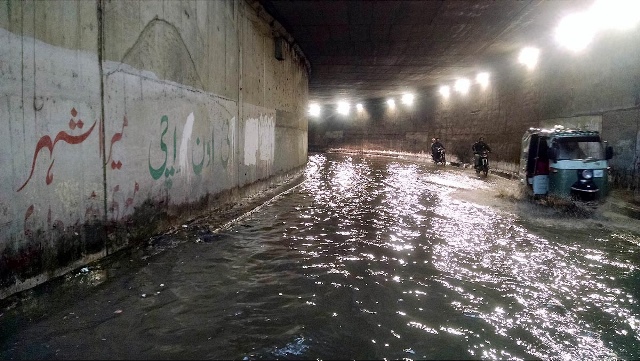 The virtual paralysis of the city exposed the tall claims of the city’s municipal authorities – including District Municipal Corporations, Karachi Metropolitan Corporation and cantonments boards – who boasted of better preparations to deal with monsoon rains.

Buck-passing started immediately. Deputy Mayor Arshad Vohra decried what he called “lack of cooperation and support from the provincial government”. He said comprehensive planning was required to deal with ‘natural disasters’ of this magnitude. 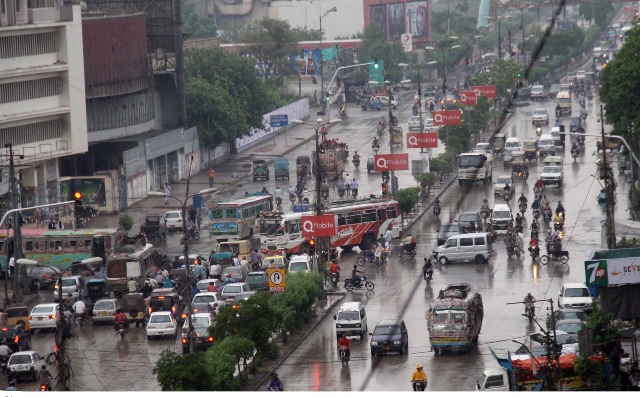 The K-Electric was also caught ill-prepared as 483 feeders of the power utility tripped, plunging most neighbourhoods of the city into darkness. These included Korangi, Landhi, Nazimabad, Liaquatabad, Malir, Federal B Area, Saddar, Gurumandir, Mehmoodabad, Gulshan-e-Maymar, Orangi Town, and North Karachi.

The power utility said restoration of the feeders would start only after the rain stopped, meaning residents would have to go without electricity for hours. 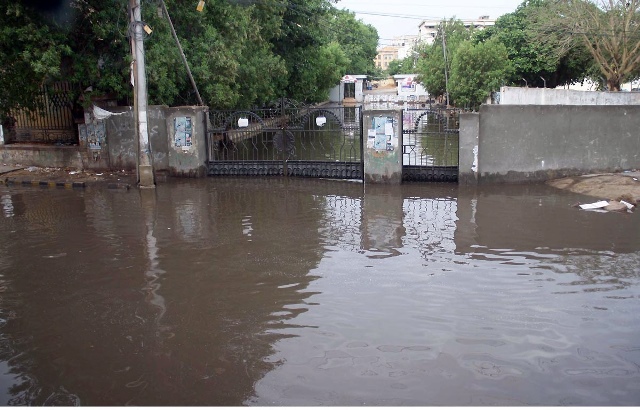 A K-Electric spokesperson advised people to stay away from electricity pylons and transformer to avoid electrocution. But the advice was apparently thrown to the winds by residents as at least six people died after suffering electric shock in Orangi Town, Shah Faisal Colony, Hussainabad, Liaquatabad and Shahrah-e-Noor Jahan areas.

According to the Met Office data, the city received over 50 millimeters of rain. “The current monsoon rain spell will continue until Friday evening,” Abdur Rashid, the Director Met Karachi, told a news channel in a telephone interview. 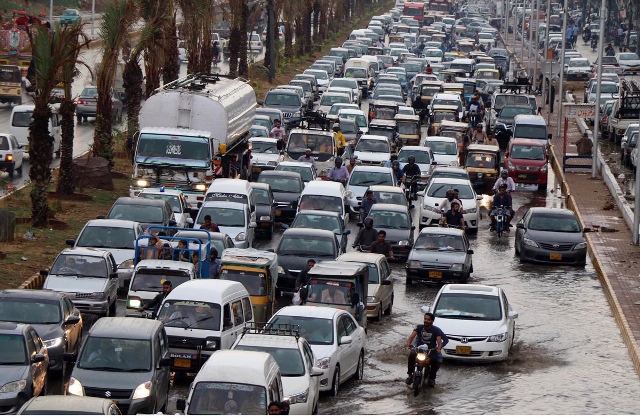 Monsoon rains also lashed several districts in rural Sindh bringing down the mercury. Low-lying areas were inundated, while cities suffered hours-long power outages. At least six people, including three women, were reportedly killed when lightning struck in Tharparkar and Mirpurkhas districts. The rain started on Wednesday with the Met Office recording the highest rainfall of 12 millimetres in Badin district and 8mm in Thatta district.

Though the top civil leadership has once again swung into action directing the authorities concerned to take preemptive measures in order to avoid loses but they appears to be least concerned about the recently approved National Flood Protection Plan 2015-2025 which requires funds for effective implementation. 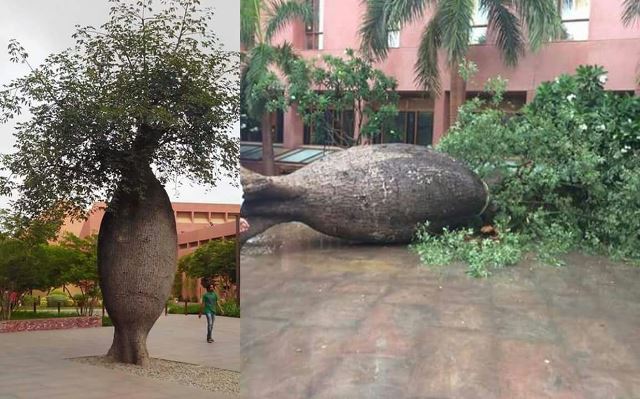 The PC-1 of the 10-year National Flood Protection Plan worth Rs1.77.66 billion is all set to be completed by July end, but so far it is unclear who will provide funds for its implementation, an official told The Express Tribune on condition of anonymity.

National Disaster Management Authority Chairman Lt Gen Omar Mahmood Hayat has meanwhile convened an emergency meeting to review arrangements made by the authority to deal with any untoward situation during the ongoing monsoon rains. 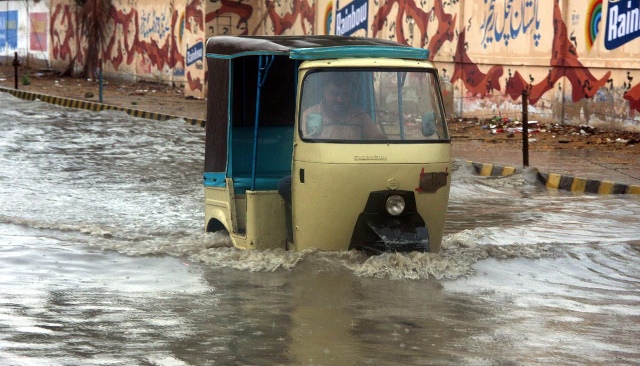 He was briefed about the current situation of water inflow and outflows in the major rivers of the country, road situations, highways/motorways, water situation in the dams among others. Hayat stressed upon the need for strengthening coordination between all the concerned departments during monsoon and to work like a team.

(With additional reporting by our correspondents in Hyderabad and Islamabad)

Eid Holidays: No casualty in one wheeling incidents