The PTI chief vows to take the proces­s of accoun­tabili­ty to its logica­l end
By Z Ali
Published: September 19, 2017
Tweet Email 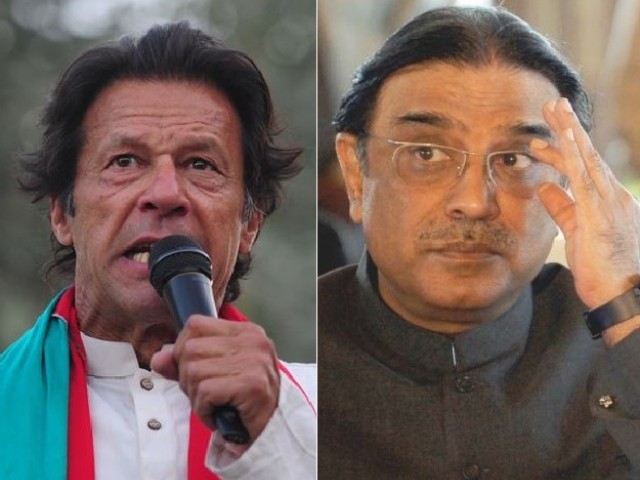 “We will take this accountability to its logical conclusion. One of them [former prime minister Nawaz Sharif] is gone now. Now we will go after Zardari and will put him in the prison,” Imran said  while addressing a public rally in Hyderabad. “Zardari, now it’s your turn,” he added.

In this one of the PTI’s rare public mobilisation activities in Hyderabad, Imran briefly outlined the party’s reform plan for Sindh if it came to power.  However, most part of his speech was reserved for slamming former PM Sharif and former president Zardari, whose party rules the province

Imran ascribed all the problems of Sindh to Zardari and his sister MNA Faryal Talpur and questioned how much money the two siblings wanted to amass. “Zardari is the biggest illness of Sindh. Talpur should also tell us in whose pockets the ill-gotten money goes which she gathers by selling government jobs?”

He said Zardari used to black movie tickets outside Bambino cinema in Karachi while his father owned only 150 acres of land. But now, he claimed, Zardari’s wealth had skyrocketed and he owned 19 sugar mills, huge swathes of agricultural lands and hotels and properties in Dubai and UK.

PTI to hold last rally in Kashmore on May 24

“If the National Accountability Bureau, the Federal Board of Revenue and the Federal Investigation Agency had been strong and autonomous, they would have caught and convicted Sharif and Zardari for corruption and fraud.  If the courts were working properly, like the apex court is working now, both of them would be in jail,” he added

Imran Khan also asked the PPP’s chairman Bilawal Bhutto Zardari to tell the nation what credentials he possessed that qualified him for the position of leading the whole nation. “Have you worked or earned even for a day?” the PTI chief asked.

He compared the PPP’s founding leader Zulfikar Ali Bhutto with his grandson Bilawal and said Bhutto struggled in politics before coming to power unlike his grandson. “Have you ever questioned your father [Zardari] from where did he get so much wealth or your aunt why jobs and contracts are sold?”

Zardari dismisses talk of deal in his acquittal

Imran mocked Sharif and the MQM founder Altaf Hussain, saying both the leaders had united in their exile in London. “Now both will make telephonic speeches and heap scorn on the army.”

He also criticised Sharif’s daughter Maryam Nawaz and accused her of conspiring against the armed forces at the behest of Pakistan’s enemies. Referring to her Sept 17 speech in Lahore, the PTI chief said the speech manifested who was behind the Dawn Leaks scandal.

The PTI’s Vice Chairman Shah Mehmood Qureshi asked the people of Sindh to take cue from people of Punjab who have rejected the PPP. He gave example that the party secured only around 1,400 votes in by-election on Sep 17 in Lahore’s NA-120 constituency which it had won thrice during Bhutto’s time.

“Imran Khan you go to Punjab and I [Qureshi] am coming to Sindh,” he announced, suggesting that Imran will lead the PTI’s campaign for 2018 general elections in Punjab and he will do the same in Sindh.