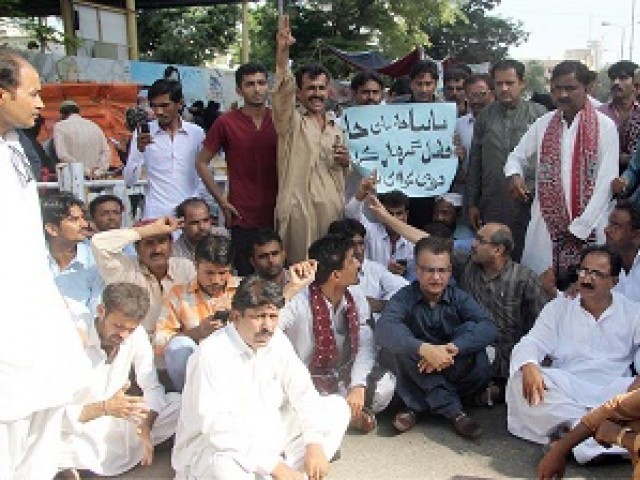 Carrying banners and placards inscribed with slogans against the Sindh government, QAT workers said five girls have been murdered in the last week in the province. PHOTO: ONLINE

KARACHI: Sindh High Court (SHC) Chief Justice Ahmed Ali M Sheikh has called for reports from the Hyderabad DIG and Dadu SSP about an incident in which a 19-year-old girl was allegedly murdered by an influential landlord for refusing his marriage proposal.

Judicial officials said CJ Sheikh had taken notice of media reports relating to the alleged murder of Tania Khaskheli on September 16.
The top provincial judges directed the Hyderabad DIG and Dadu SSP, along with the investigation officer of the case to appear with investigation reports on September 19.

According to reports, influential local landlord Khan Noohani of Jhangara Baraja Town in Dadu district had barged into Khaskheli’s house and shot her dead.

Later, the victim’s family held a press conference where they alleged that Noohani had murdered their daughter for refusing his marriage proposal. They had accused the local police of not arresting Noohani, who had political clout.

Carrying banners and placards inscribed with slogans against the Sindh government, the workers of the party said that five girls have been murdered in the last week in the province. “The government is patronising the criminals in Sindh. They are advocating the case of model Ayyan Ali who was caught red-handed while smuggling money, but are not taking action against the killing of an innocent girl,” Palijo said.

Since Noohani has the support of local Pakistan Peoples Party leaders, the police was avoiding taking action. This irked the civil society and political parties who came out on the streets in protest while the issue also went viral on social media, which compelled Chief Minister Murad Ali Shah to take notice. Shah visited the victim’s family, assuring them that justice would be served.

The chief minister also directed the IG to take action against police and asked the Jamshoro SSP to arrest the SHO who was unwilling to act against the culprits.

‘We have a love-hate relationship with the US’