2016’s joint statem­ent had not named these groups explic­itly even though it had called on Pakist­an
By News Desk
Published: September 15, 2017
Tweet Email 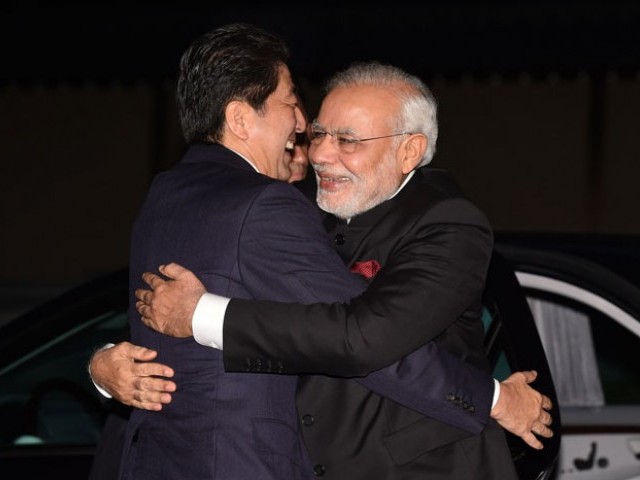 In this photograph taken on August 30, 2014, India's Prime Minister Narendra Modi (R) is embraced by his Japanese counterpart Shinzo Abe upon his arrival at the State Guest House in Kyoto. PHOTO: AFP

In Japanese PM Abe’s recent visit to Ahmedabad, India, at the launch of the first bullet train, a joint statement was released from both the countries pushing Islamabad to act against cross-border terrorism.

The joint statement names Lashkar-e-Taiba (LeT) and Jaish-e-Mohammad (JeM) as terror groups. Addressing the issue of terrorism, the statement said that Modi and Abe looked forward to a fifth India-Japan Consultation on Terrorism, and strengthening cooperation against terrorist threats from groups including “al-Qaeda, Islamic State (IS), JeM, LeT, and their affiliates”, reported Times of India.

2016’s joint statement had not named these groups explicitly even though it had called on Pakistan to bring the perpetrators of terrorist attacks, including 26/11 Mumbai attacks and the 2016 Pathankot strike, to justice. However, it did underline the need for all countries to deal with “trans-national terrorism” emanating from their territory. 2017’s statement is much more direct, following the BRICS’ statement on terrorism.

India’s Foreign Secretary S Jaishankar said that the message to Pakistan was “quite clear” after the back-to-back Xiamen Declaration and the India-Japan statement. The naming of LeT and JeM by BRICS was seen as a significant achievement as China had, in 2016, blocked India’s move to include their names in the Goa Declaration.

“These organisations, they have some of their remnants in Pakistan, which we’re cleaning,” Pakistan’s Foreign minister insisted. “But as Pakistan, we reject this thing categorically, no terrorist organisation has any complete safe havens.”

Pakistan ‘disappointed’ by US reliance on ‘false narrative’

Last month, US President Donald Trump’s speech on Afghanistan policy also included Pakistan. Trump accused Pakistan of “housing the very terrorists that we [Americans] are fighting” in Afghanistan. He ignored the contributions and sacrifices Pakistan has made in fighting terrorism.

US President Donald Trump’s speech, which was peppered with vainglorious rhetoric and veiled threats, ‘disappointed’ Pakistan, which advised Washington to work with Islamabad “instead of relying on the false narrative of safe havens”. It is disappointing that the US policy statement ignores the enormous sacrifices rendered by the Pakistani nation in this effort,” Pakistan’s official response stated.

It also said Pakistan does not allow use of its territory against any country. “Instead of relying on the false narrative of safe havens, the US needs to work with Pakistan to eradicate terrorism.”