The current trial of Islam: Heroes who're at constant war with prejudice

The current trial of Islam: Heroes who're at constant war with prejudice 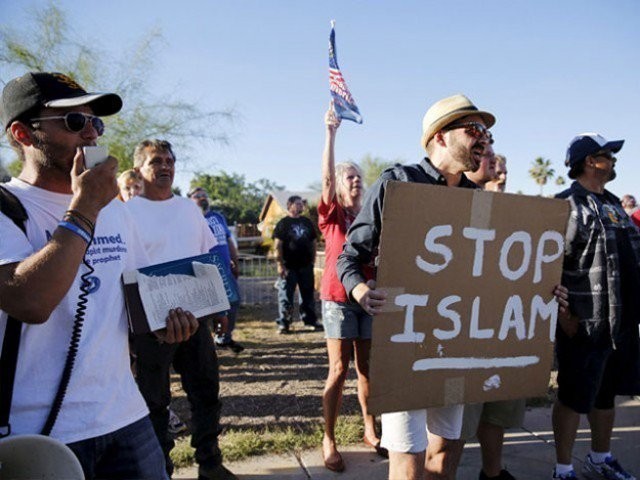 The world cannot hear Muslims condemning terrorism simply because it is not listening. PHOTO: REUTERS

Since 9/11, US media outlets from across the political spectrum of liberal, bleeding hearts to ultra-conservative Islamophobes have given airtime and countless pages of column space to commentators whose sole purpose has been to do one of two things: speak to the ‘problem’ that is the radicalised Muslim or to rebuke the entirety of the Muslim world for its failure to prevent or condemn the ‘problem’ that is the radicalised Muslim.

By now, this commentator is a familiar trope: he (and, he is typically a he) is usually a white, extremely educated, possibly wealthy ‘expert’ on Islam by virtue of his having been alive through a minimum of four presidencies and three major wars.

Muslims all over the world condemn terrorism, express solidarity with French

However, the problem is not only the commentator’s maleness, whiteness or questionable qualifications; the problem is that there are 1.6 billion Muslims in the world who are very much available and able to speak for themselves.

Yet, 16 years later, not only do non-Muslims continue to speak on behalf of Muslims but also ask that Muslims publicly apologise and condemn every act of horror committed under the banner of Islam – no matter how absurdly beyond their control it may have been.

One such high-profile demand took place back in 2014 when the then President Barack Obama, during his address to the United Nations’ General Assembly, implored Muslims to more “explicitly, forcefully, and consistently reject the ideology of al Qaeda and ISIL” also famously known ISIS. 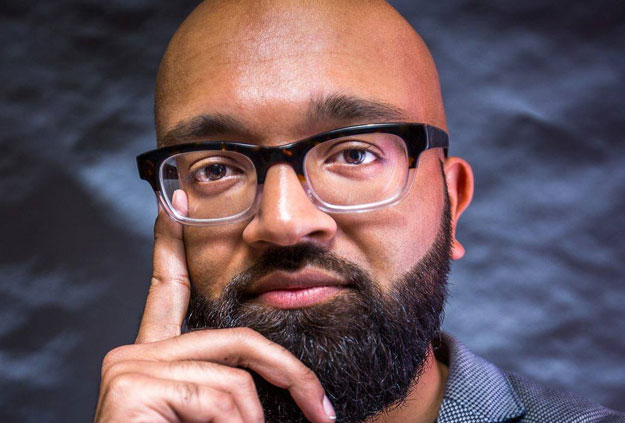 Such a loaded statement was not only recklessly misinformed but also shockingly offensive.

Indeed, to imply that in the 16 years since 9/11, Muslims have done nothing but sit on the sidelines, twiddling their thumbs and silently watching Islam mutate into both global threat and enemy, could not be further from the truth of things.

Take the three years since Obama’s speech at the UN General Assembly as an example.

A few months after Obama’s speech a group of 70,000 Muslim clerics from around the world came together to sign off on a fatwa against every major terrorist organisation including al Qaeda and ISIS. In 2015, nearly 1.5 million people congregated at an annual Sunni and Shia Muslim event in India where they drafted and signed a document in protest of global terrorist activity. In the summer of 2016, within hours of the Pulse Nightclub attack in Orlando, Florida, every Muslim world leader – from the Maldives to Pakistan – was quick to publicly condemn the shooter Omar Mateen’s twisted ideologies and offer its full support and solidarity with the US.

“At this point in 2017, if you [still] think Islam is a religion that promotes [or] condones violence, you’re stupid,” says Aman Ali.

Moreover, at home, despite facing ongoing allegations that Pakistan is a safe haven for terrorists, we continue to pay the heavy price of one of the highest numbers of terrorist attacks and one of the largest death tolls.

So, why then must the Muslims continue to shoulder the burden of something entirely out of their control? Perhaps – a paraphrased line of fellow columnist Mark Woods – the world cannot hear Muslims condemning terrorism simply because the world is not listening.

Aman Ali, a stand-up comedian who also stars in the Emmy-nominated documentary The Secret Lives of Muslims, says in no uncertain terms that he is done defending Islam.

“At this point in 2017, if you [still] think Islam is a religion that promotes [or] condones violence, you’re stupid,” says Ali. 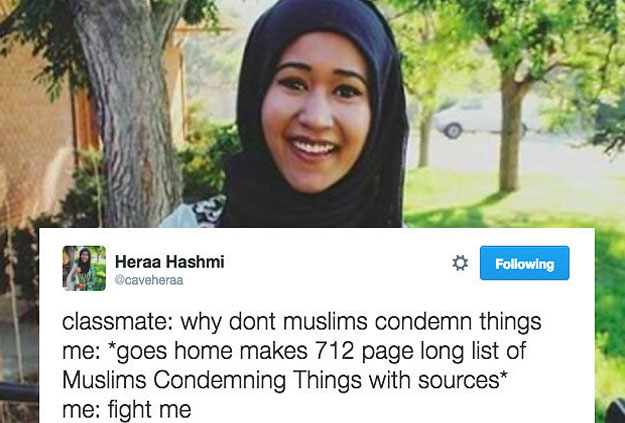 “We’ve been condemning the acts of violence for almost 16 years. Has it really helped? Not really because those who are ignorant choose to stay ignorant. Has anyone ever said ‘hmm, I used to think Muslims were violent people, but then I saw Amjad Uncle show up on CNN to talk for 30 seconds about how ‘do not do the violence’ and it opened up my eyes.”

While Ali does not see public condemnation as particularly useful, he does see his status as a well-known comedian a way for him to tackle the absurd narrative the evening news would have you believe about Muslims.

“As a writer and performer, I do use my platform to engage, inform and educate people [on] how absurd it is for any human to condemn something they have absolutely nothing to do with,” says Ali who, in the aftermath of last year’s US presidential election, created a comedy tour called ‘I’m a Muslim, Ask Me Anything’. The tour specifically travelled through parts of America where Trump beat Clinton by large margins.

“Muslims should not have to [apologise for and publicly condemn terrorist attacks] and should continuously be pointing out the hypocrisy in holding us to that standard,” says Hashmi who also thinks asking Muslims to apologise does more harm than good because it perpetuates an unfair label even though almost all Muslims are equally horrified by the brutality of terrorist attacks.

Still, others feel differently when it comes to choosing whether to condemn or not to condemn.

Khurram Dara, an attorney and author of Contracting Fear: Islamic Law in the Middle East and Middle America, says while he himself no longer chooses to spend his time defending his faith, he still sees it as an important duty for religious leaders to make public condemnations in order to counteract extremist propaganda. 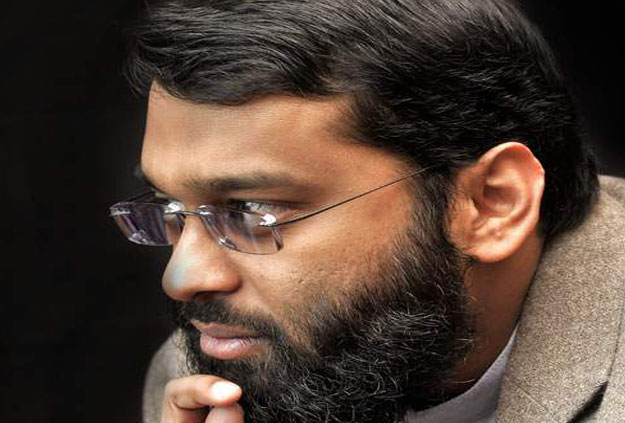 It appears that at least some religious leaders would agree.

For prominent Pakistani-American religious scholar, Shaykh Yasir Qadhi, condemning the acts of global terrorist organisations is a regular part of his workday.

“[It] needs to be done because the average person is absolutely ignorant about Islam and therefore needs to hear condemnations,” continues Shaykh Qadhi. “But I personally always follow up such condemnation with an expose about the hypocrisy of why only Muslims are asked to condemn.”

Interestingly, of the several people contacted to be interviewed, two well-known authors and one actor declined the requests on the grounds that while they are happy to talk about their work and their personal relationship with their faith, they, as a general rule, do not speak on Islam or terrorism.

Their denial, in itself, is a powerful statement.

After all, instead of publicly condemning acts, not within your control, is it not easier to throw off completely the shackles of one’s Islamic identity? Is it easier to try, make it, and to keep moving forward, if one just completely disassociates his or herself from a religion forever mired in controversy and conflict?

In 2011, former Al Jazeera host and current New York Times columnist Wajahat Ali working alongside a group of experts released a 138-page document that dug deep into the Islamophobia network as it then existed in the US.

When asked, since the release of his report, have Islamophobes retreated or have they only become emboldened now that a vehemently Islamophobic president is in charge of what is arguably the world’s highest office, Ali says, the work has shifted into overdrive. 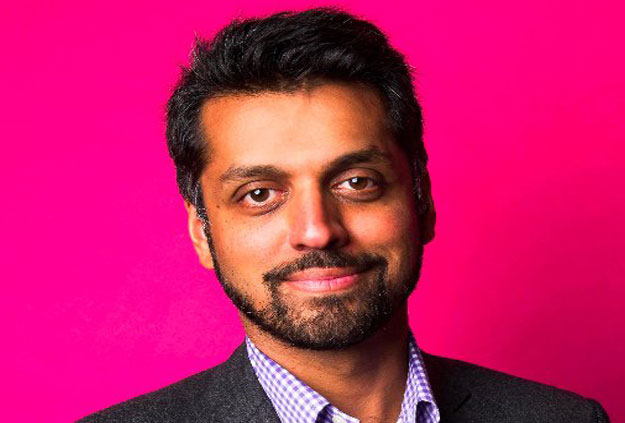 Nevertheless, the way Ali describes it, being in overdrive mode sounds not so terrible.

“This time around we have a multicultural coalition of the willing. Many American communities have realised that we, and other minorities, weren’t just whining and complaining about double standards, racism, and hate all these years,” says Ali.

“Now it’s out in the open. You can smell it. You can grab it and taste it – and no, it’s not halal or kosher.”

The power of prejudice

Many questions irk Wajahat Ali. How will we talk about Islam? About Muslims? About race? Will we embrace those who wear a kufi and hijab? Those with caramel-coloured skin? Or will we turn them away? The power of prejudice and the way it affects groupism may be.

Prejudice is one hell of a psychological lever. Not only do studies show that the victims of prejudice suffer from high rates of chronic stress, anxiety, depression, substance abuse and suicide, but by now it is also well-documented that the negative effects of a prejudiced mind wreak havoc on the person harbouring prejudicial feelings towards minorities. In fact, studies confirm that people prone to prejudicial biases are more prone to depression and chronic stress, which is visibly heightened during the most benign of social interactions with minorities.

Prejudice comes at a high cost to everyone; we demonise those who we fear or fail to understand. And, we are quick to steer clear of such folks instead seeking out folks who share the same beliefs as us. In a world increasingly connected through social media connections, it is easier than ever to surround ourselves with people who agree with us.

Although prejudice might be a permanent human condition, a great measure of comfort comes with knowing that there is amongst us a group of folks who choose to remain committed to the involuntary and unpaid task of being both the mouthpiece and PR manager of a much-maligned religion.

Indeed, such thankless selflessness and commitment lets one, if only briefly, dare to dream that the triumph of prejudice need not be the final word in this current trial of Islam.

Maria Kari is a lawyer and freelance journalist. She tweets as @mariakari1414