Qatar has been hit by a land and air embarg­o impose­d by Saudi Arabia and its allies­
By AFP
Published: September 11, 2017
Tweet Email 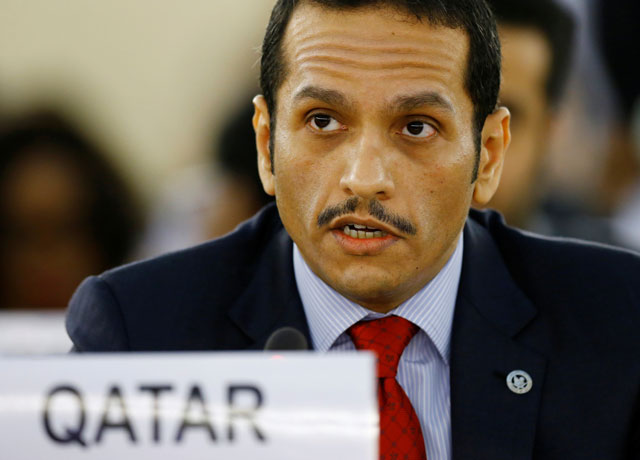 GENEVA: Qatar’s foreign minister on Monday accused the “illegal” blockade against his country for trying to force it into a “state of trusteeship”.

Qatar has been hit by a land and air embargo imposed by Saudi Arabia and its allies, who cut ties with Doha on June 5 accusing it of backing extremists.

But Al-Thani insisted that “it is no secret that the real motives behind the siege and the severing of diplomatic relations with the state of Qatar were not aimed at fighting terrorism.”

His comments came after Saudi Arabia vowed Sunday to keep pressuring Qatar until demands by the bloc of Arab states had been met, dampening hopes for a US-mediated resolution to their diplomatic crisis.

The bloc’s 13 demands include Doha ending its alleged support for extremist groups, closing a Turkish military base in the emirate and downgrading diplomatic ties with Tehran.

The Saudi move came just two days after US President Donald Trump spoke with the leaders of Saudi Arabia and Qatar in a bid to mediate.

Trump said he believed the dispute between Riyadh and Doha, both key US allies, could be solved “fairly easily”.

The Saudi and Qatari rulers spoke by phone on Saturday, raising hope for talks.

But Riyadh later suspended the dialogue, accusing Doha of distorting facts by wrongly implying that Saudi Arabia had initiated the outreach.

On Monday, the Qatari foreign minister said his country was taken aback when Saudi Arabia disputed a readout of the “positive” call.

“Unfortunately, we have seen – half an hour later – a retaliation from their side by issuing a statement that what we have issued is a lie,” Al-Thani told reporters on the sidelines of the rights council.

He, however, stressed his country’s “readiness for dialogue to end this crisis.

“We are willing to talk to them, we are ready to engage if it is based on principles which are not violating the international law and respect the sovereignty of each country.”