Rabbit­s need little space to live and can surviv­e even on less food
By Shamsul Islam
Published: August 31, 2017
Tweet Email 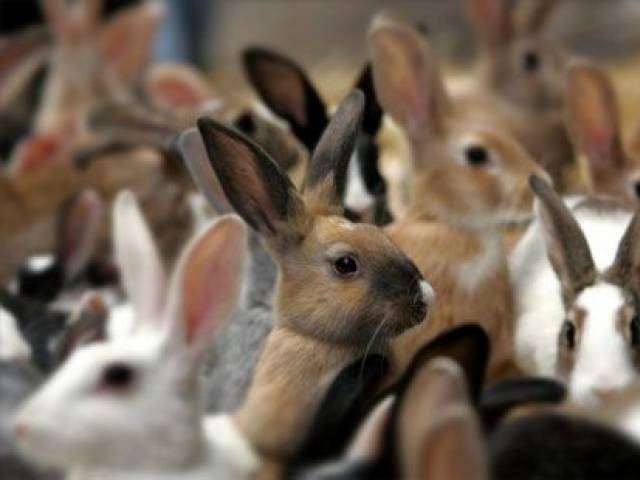 This was observed by Hira Komal and Dr Sehar Aamir veteran experts of the University of the Agriculture, Faisalabad in a study conducted on rabbit farming, also known as cuniculture. Giving details of the study Komal told The Express Tribune that rabbits need small place to live and can survive even on less food. She said rabbits were very more docile than poultry and birds.

“There is a misconception about the meat utility of rabbits in our society as it has extra ordinary potential of calcium and phosphorus contents of its meat are more than any other meat. Besides, cholesterol fat and sodium of rabbits are less than other meats,” she said.

Dr Sehar Aamir pointed out that Pakistan was the sixth most populous country in the world. “The more the population of a country is, the more it needs sources of food and shelter,” she said.

“To meet the demand for food, we cannot rely on just beef and mutton. Rabbits are known as ‘micro-livestock’ and a great source of food. There is a great opportunity for rabbit farming in our country. But most of the people just keep them as pets,” she added.

“To keep rabbits commercially cage method is the best. In this method, rabbits are kept in iron cages. A rabbit should be given enough space in the cage along with food armaments. Male and female rabbits should be kept separate from each other. They should keep in same rood when they need mating to produce baby rabbits,” she added.

She said green leafy vegetables including, spinach, carrots, cucumber, green grass and vegetable waste can easily be used as food for rabbits. For commercial rearing, even poultry food can be used to feed rabbits.

She said with a good management, one can achieve genetic potential of rabbits for weight and size which, of course, vary according to breed and sex. Some rabbits may grow up to size of a big cat. The average weight is 3-4 kilogrmmes.

According to the study, with rabbit farming, Pakistan can meet the ever-growing food demand and increase the income of farmers with little investment. It will also make a significant share in meat production and can have a positive impact on the economy of Pakistan.

1. The meat of rabbit is very tasty, easily consumed and all people belonging to all religions can eat it.

2. They grow very fast and the female rabbit (doe) produce 2-8 babies every time. So, they are fast breeder.

4. Raising rabbit can be a great income source to the unemployed people and landless farmers.

5. The ratio of meat to bone is high meaning there is more edible meat on the carcass than even a chicken.