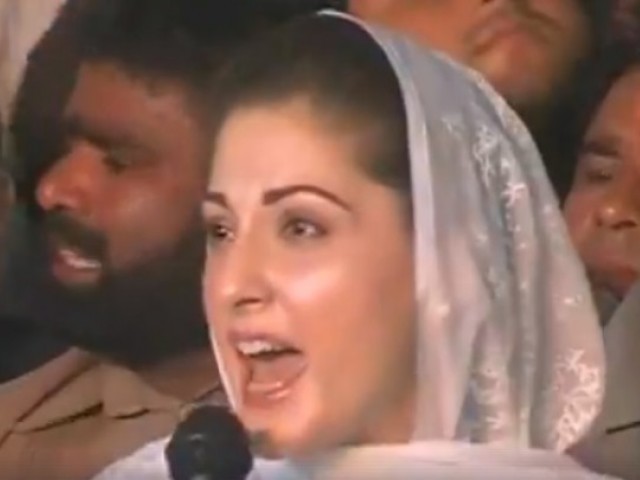 LAHORE: Former prime minister Nawaz Sharif’s political scion, Maryam Nawaz, has said opposition parties’ 2014 sit-ins, Panama Papers and the subsequent controversy with regard to Sharif’s Aqama [or work permit for UAE] were all part of a conspiracy whose target was her father.

“Sit-ins, Panama and Aqama were all a pretext. Nawaz Sharif was the real target,” Maryam said on Tuesday as she formally inaugurated election campaign for her mother Begam Kalsum Nawaz at Lahore’s NA-120 constituency.

Kalsum, who is currently in London for treatment of cancer, is contesting by-polls for the seat that fell vacant on July 28 after the Supreme Court’s five-judge bench disqualified former PM Nawaz Sharif for hiding his assets in his nomination papers for 2013 polls.

Addressing the workers gathered at the inaugural, she said that NA-120 had elected Nawaz Sharif three times and all the three times he had become the prime minister of Pakistan.

“Is NA-120 ready to elect the prime minister the fourth time?” she asked the enthusiastic PML-N workers, hinting at the possibility that Kalsum might be the next PM, if elected as MNA from NA-120.

She said on 17 September voters from NA-120 would reject the ‘politics of puppets’ and avenge themselves for, what she called, ‘disrespect’ of their votes. She said the cases against Nawaz Sharif that started from Panama and ended on Aqama, prove that Nawaz Sharif is honest and righteous.

She said conspiracies against Sharif continued for four years, but he kept serving the people of Pakistan and gave them projects like the China-Pakistan Economic Corridor (CPEC), metro trains, network of roads, orange train and electricity projects.

“Nawaz Sharif kept his silence for four years, but now that he is speaking his heart out, the opponents are raising objections,” she said.

She asked the audience how could a premier, who had given Pakistan the CPEC, motorways, atomic power and network of roads, be disqualified. “How can political parties criticising development projects especially of Lahore, come to the NA-120 to ask for votes,” she added.

Prior to inauguration, she went to Data Darbar to pay homage to the Sufi saint. She also held meeting with PML-N workers at Mall Road. Maryam also opened the PML-N election office at Mozang, Safain Wala Chowk.

Maryam began meeting PML-N political workers and leaders from Saturday and has held back to back meetings in connection with the election campaign for her mother at Sharif’s Model Town residence.