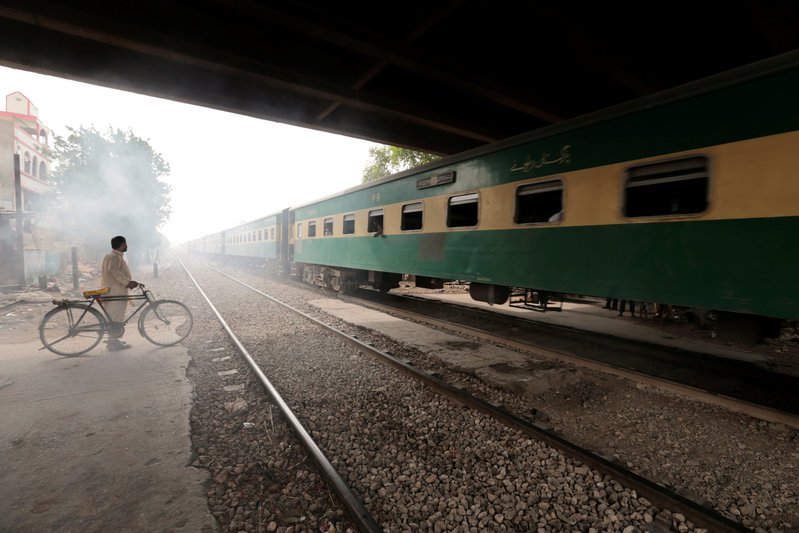 A man waits to cross a portion of track once shared with the disused Karachi Circular Railway line in Karachi, Pakistan, May 24, 2017. PHOTO: REUTERS

KARACHI: After many false starts, plans to resurrect a railway in Pakistan’s teeming metropolis of Karachi are moving ahead with the help of Chinese cash. Not everyone is happy.

The Chinese-funded US$2 billion project to revive Karachi Circular Railways [KRC], nearly two decades since it was shut down, has been touted as a way to ease pollution and chronic congestion in the port city of 20 million people.

It is also viewed with suspicion by Pakistanis who have built homes and businesses along the 43-km route connecting Karachi’s sprawling suburbs with the industrial and commercial areas of the megacity.

In April, a push to remove shanty towns near the rubbish-strewn railway track was met with violence as residents clashed with police and set fire to machinery used for demolishing homes.

Officials say nearly 5,000 houses and 7,650 other encroaching structures have been erected along the route of the old KRC, which closed in 1999 after 29 years of shunting passengers across the sweltering city.

Three-wheel auto-rickshaws and mini-buses, often cramped and with no air conditioning, have filled the transport gap on Karachi’s streets despite grumbling from commuters.

Work on the new KRC is scheduled to begin later this year, with financing from the $57 billion China-Pakistan Economic Corridor [CPEC] project, part of Beijing’s wider Belt and Road initiative to build trade routes from Asia to Europe and Africa.

Beijing’s cash is building motorways and power plants to alleviate Pakistan’s energy shortages, but Karachiites hope it could also modernise their city at a time when traffic appears to be spiraling out of control.

“Let’s hope under CPEC, KCR is revived and people will get an alternate to miserably public transport,” said Manzoor Ahmed Razi, chairman of the Railway Workers Union.