All set to celebrate Independence Day

All set to celebrate Independence Day 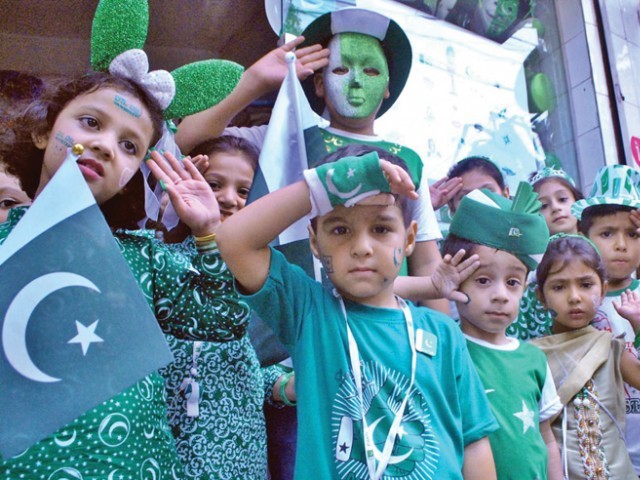 The federal capital has also been decorated with banners emblazoned with different slogans and wishes of Islamabad Mayor Sheikh Anser Aziz in respect of Independence Day.

The Islamabad Metropolitan Corporation (IMC) along with Capital Development Authority (CDA) has planned to organise a fireworks demonstration in connection with Celebrations of Independence Day at Parade Ground Shakarparian on Sunday night ahead of Independence Day.

Similarly, the Rawalpindi people are also all set to observe ‘Jashn e Azadi’ with zeal and enthusiasm. Different political parties have planned to organise functions on the eve of Independence Day.

Large stalls of national flag and bounties have been established at different roads, highways, small streets and markets.

To celebrate the 70th Independence Day of Pakistan, the political parties are preparing to hold separate events in twin cities, whereas, the main roads are being decorated with national flags containing patriotic slogans with addition of the pictures of national leaders.

Meanwhile, the Pakistan Army Museum near GHQ in garrison city will be open for general public from 9:00am to 4:00pm on Independence Day.

A musical night is scheduled in Rawalpindi Arts Council by Rawalpindi Metropolitan Corporation and Rawalpindi Mayor Sardar Naseem will be the chief guest of this musical show.

Pakistan National Council of the Arts (PNCA) will also organise a mega Musical Night on Sunday in connection with the 70th Independence Anniversary. The event includes musical performances representing colours of Pakistan along with performance by Turkish artists.

Renowned singers from all four provinces including Gilgit-Baltistan and Azad Kashmir will also participate in the music night.

It is pertinent to mention here that the Punjab government has announced 50 per cent off on the tickets of chair lifts at Murree to facilitate the masses on occasion of Independence Day.

The Pakistan Sports Board (PSB) will organise a series of exhibition matches in Islamabad on Sunday and Monday to mark 70th Independence anniversary of the country in a befitting manner. A friendly football and a hockey match will be played on Sunday between Pakistan White and Pakistan Green. Similarly, a basketball match will be held on Monday.  The Vice Premier of The State Council of China, Wang Yang, accompanies by a high level delegation, has arrived in Islamabad on Sunday to participate in the 70th Independence Day celebrations of Pakistan.

Islamabad Traffic Police have prepared a special plan for August 13 and 14, 2017.

Margalla Road will be completely closed for traffic from Shaheen Chowk to F-10 intersection. Police have announced to take stern action against motorcyclists for one wheeling besides of imposing heavy fines.