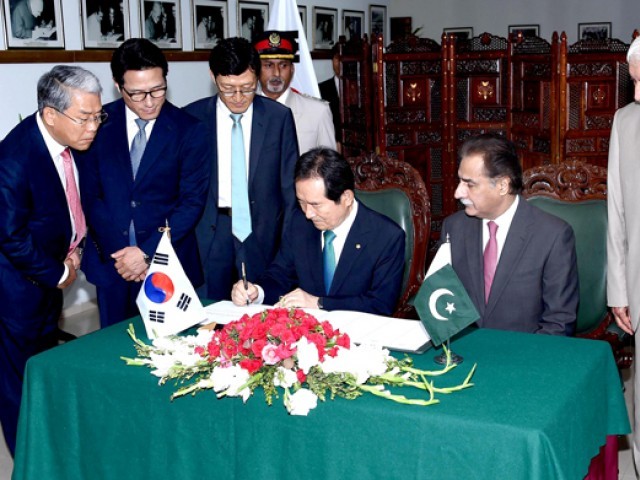 Speaker of the National Assembly of South Korea called on Prime Minister Khaqan Abbasi at PM House on Tuesday where the dignitaries of both country emphasized on the need for increase in bi-lateral trade. PHOTO: PID

The speaker of the National Assembly of South Korea called on Prime Minister Khaqan Abbasi at the PM House on Tuesday where the dignitaries of both countries emphasised the need for increased bi-lateral trade.

The newly appointed prime minister welcomed the South Korean delegation and said that Pakistan values its excellent diplomatic ties, of over three decades, with the Republic of Korea.

“The friendly relations between our countries have grown in all fields especially in trade and investment,” PM Abbasi was quoted as saying.

The premier highlighted the need to take pro-active measures to increase the quantum of bilateral trade and invited Korean companies to take full advantage of Pakistan’s liberal investment regime and invest in important sectors of the economy including energy, mining, agro-industry and in the industrial and IT sectors.

The government of Pakistan has established Special Economic Zones (SEZs) and Korean companies can establish their units in these SEZs, Abbasi said.

Sye-Kyun thanked PM Abbasi for the warm welcome given to the Korean delegation and expressed hope that bilateral relations between the two countries would prosper further.