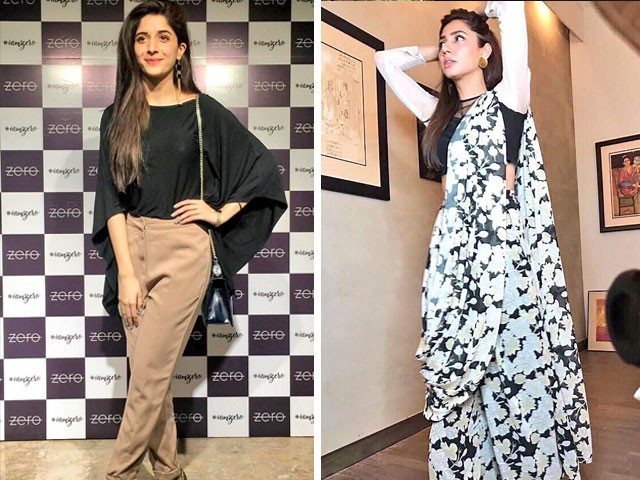 Sonam Kapoor with sister Rhea Kapoor launched a contemporary-chic clothing line. It’s called Rheson and its most definitely carving a footprint amid Pakistani fashionistas – and for good reason!

Mahira Khan and Mawra Hocane were recently seen attired in the up-to-the-minute brand and while Mahira seriously slayed with her irrefutable charisma and inimitable élan (duh!), Mawra miserably failed to influence our fashion radar. Again. Oops!

Mawra or Mahira, who wore the black gown better?

The Bol beauty aced her Rheson sari, loaning it her own spin. Her style howled a seamless combo of punk rock meets traditional flair – which is not only badass but ridiculously original.

Her monochrome crop top and leather shoes only added to her stifling-hot guise. Keeping her hair and makeup subtle and self-effacing, the Raees hottie skillfully verified the statement: ‘less is more’! Talk about being a head turner and a half!

The actor tried her level best to stand out and create a memorable aura as she was spotted in a Rheson top at a launch – but alas, her efforts turned out futile. Kudos for trying Mawra but the look you created squealed ‘blah’ and mediocre. It was the epitome of boring.

The asymmetric top which featured an interesting boat-neck was indisputably modish but the Sanam Teri Kasam actor dampened it by teaming it with khaaki pants that didn’t seem to fit right. So forgettable, we’ve already forgotten about it!

Shah Rukh Khan now has a ‘paan’ named after him!