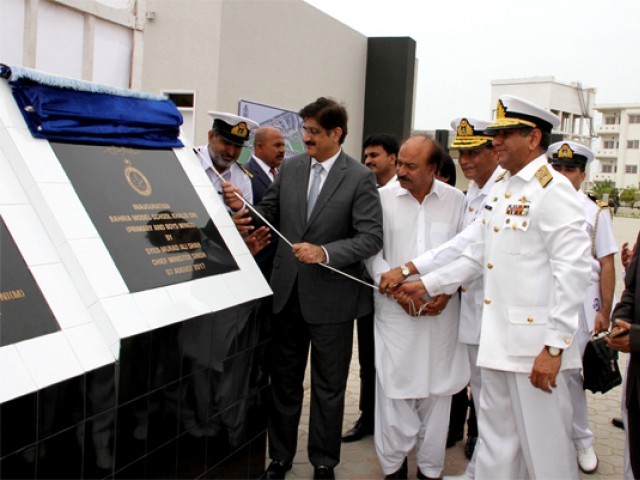 KARACHI: Chief Minister Murad Ali Shah condemned on Monday the trend of mud-slinging and character assassination in politics, which, according to him, were being carried out by novice politicians. He was talking to the media after the inauguration ceremony of Bahria Model School in Younisabad.

The CM said defaming politicians was a dangerous trend as it posed threat to the political system at large. “This must be stopped in the larger interest of the country and its people,” he said. He was accompanied by Parliamentary and Food Minister Nisar Khuhro, Education Minister Jam Mehtab Dahar, Livestock and Fisheries Minister Muhammad Ali Malkani, School Education Secretary Abdul Aziz Uqaili and Karachi projects director Niaz Soomro.

Replying to a question, Shah said Pakistan came into being in the month of August, therefore Nawaz Sharif should abandon the politics of agitation on GT Road and start working for the development of the country. He urged political parties to resolve all outstanding issues in Parliament.

Govt will introduce reforms to attract investment in Sindh: CM

“I do not have time to listen to the politics of abuses and agitation. I am busy serving the people of my province. We are working for the development of infrastructure, improvement of health services and education,” said the CM.

Earlier, he addressed the inauguration ceremony of Bahria Model School. In his speech, Shah admitted that his government has not achieved the targeted results in education. “Despite my serious and sincere efforts, I have not achieved satisfactory results in the education sector,” he said, added that in the health sector, the government achieved positive results with the partnership of the private sector. The CM announced he wanted projects based on public-private partnership in education sector as well.

He also appreciated the role of the Pakistan Navy in promoting education. “Our partnership with Bahria has been long-standing. We are working together at Petaro and Sanghar [cadet colleges],” he said. The CM also invited other forces to work with the provincial government for improving the education system.

CM claims progress in education in the province

“We have made considerable expansions in the education sector from primary to university levels but now the time has come to consolidate our efforts and this will be possible when the private sector, teachers, parents and civil society come out to help the government,” the CM said.

On the occasion, Karachi Commander Rear Admiral Ather Mukhtar briefed the ceremony about the school, which was constructed by the Pakistan Naval Education Trust at a cost of Rs110 million, out of which Rs60 million was contributed by the Sindh government. He told the ceremony that the school is spread over 2.3 acres of land and has a ground-plus-three-floor building with 32 classrooms.

The rear admiral said the school has a capacity of 15,400 students who will receive education right from pre-primary to college level. He said that there was an equal quota for the children of armed forces personnel and civilians in the admission policy.

No encroachment on Federal B area school, claims Dahar