They say they have not been paid salari­es since 2012, despit­e perfor­ming duties­
By Yusra Salim
Published: July 25, 2017
Tweet Email 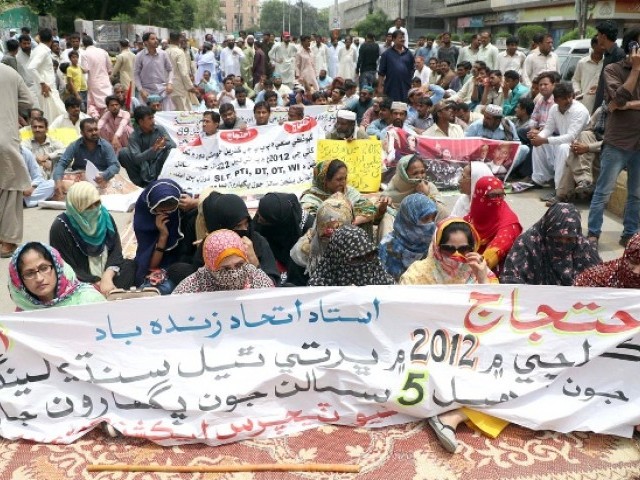 The teachers ended their protest in front of the assembly on June 5 after the school education secretary vowed to resolve their issues within a week. PHOTO: ONLINE

KARACHI: Around 300 government school teachers renewed their protest for their salaries outside the Karachi Press Club on Monday.

They held a similar protest earlier. They ended their protest in front of the Sindh Assembly on June 5, the day the provincial budget was announced, after the secretary of school education, Abdul Aziz Uqaili, assured them that their problems would be resolved within a week.

The teachers have been protesting for the last five years, as they have not received their salaries since 2012.

Appointed in 2012, when Pir Mazharul Haq was the minister for the education and literacy department, it has been alleged that the teachers were appointed illegally.

“I applied for the job, appeared for the tests conducted by the National Testing Service, gave interviews, fulfilled all the legal formalities and received my appointment letter,” explained a teacher protesting outside the press club. “We were all appointed following legal procedure and with the proper documentation,” said another teacher who has been appointed a drawing teacher at the Government Girls Lower Secondary Railway Feeder School.

Of the total there are 3,622 teachers from Karachi and 222 from Ghotki that are said to have been illegally appointed by former secretary for education and literacy Fazlullah Pechuho.

After several protests in 2013 and 2014, then education minister Nisar Ahmed Khuhro ordered an investigation so that genuine appointments could be pinpointed. After the scrutiny, around 2,600 appointees were cleared out in the process, of which 2,000 were teaching staff and 600 were non-teaching staff.

Khalil Gabol from Ghotki said in 2012 he applied for the job when it was advertised and, along with a few friends, received his admit card and appeared for the entry and medical tests. They also got the offer letters, after which they were posted at a school, he said, lamenting the fact that they never received any salaries.

All the teachers hired in 2012 were of a different cadre than regular teachers. The posts were not of primary or junior school teachers but were instead teachers of different languages such as Sindhi and Arabic. The posts were for drawing teachers, physical training teachers, workshop instructors and non-teaching staff, claimed Abu Bakar Abro who is heading the protest and formed the New Teachers Action Committee to fight for the educators’ rights.

Murree Road blocked for over an hour due to YDA protest

According to Abro, he has been appointed a Sindhi language teacher at Government Boys Secondary School Number One in Jacob Lines.

All the teachers who have not been paid since they joined in 2012 have performed duties during the general elections, local government elections and even anti-polio campaigns. “We get paid for all these [extra] duties but not our salaries,” Abro added.

“One of the reasons behind the issue is that Haq made excessive appointments in the department just before the general election, which later caused a conflict with Pechuho and the appointed teachers suffered due to it,”Abro pointed out.

Gabol said the salary issue was not limited to Karachi and Ghotki alone. Initially the issue arose throughout Sindh but the government resolved the teachers’ problems everywhere but Karachi and Ghotki, he said.

After protesting in front of the press club, the teachers marched towards the Sindh Assembly but were stopped by the police on the road adjacent to the assembly. They were waiting for the officials to speak to them. The protesters dispersed after it was decided that the secretary would meet them today (Tuesday).

“If this issue is not resolved we will go into the assembly, as the officials make false commitments every time,” warned Abro.

Since the June 5 protest, Uqaili has said that they have issues with the 2012 records. The department’s deputy director, Hamid Kareem, was on the scrutiny team that declared 2,600 appointments meritorious and legal.