Fear of petrol shortage as oil tankers go on strike

Fear of petrol shortage as oil tankers go on strike 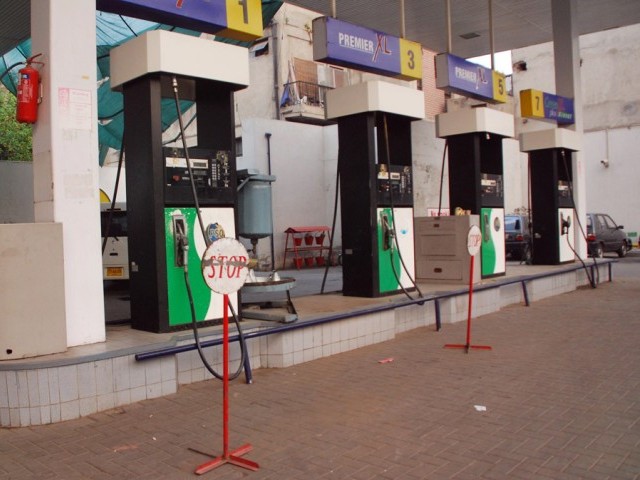 KARACHI / ISLAMABAD: The All Pakistan Oil Tanker Owners Association announced on Monday they have suspended fuel supply across the country for an indefinite period till their demands are fulfilled by the government.

Members of the association and oil tanker drivers stopped operating their vehicles in protest and halted the supply of fuel to all terminals in the country on Monday.

According to one of the managers of a fuel station in Karachi, every petrol pump has a reserve for about two to three days, therefore the oil shortage would affect them from Tuesday onwards.

He added that it would be difficult to maintain uninterrupted fuel supply as commuters are bound to flock to fuel stations to stock up on petrol.

All Pakistan Oil Tanker Owners Association Chairperson Akram Durrani said that their demands of a 70 per cent raise in the freight rate and delay in shifting oil tankers to the new parking terminal built behind the PSO terminal in Zulfiqarabad have yet to be fulfilled by the authorities.

He said that the Oil and Gas Regulatory Authority (Ogra) and other government departments such as the National Highway Authority, motorway police and provincial traffic police have created hurdles in their smooth operations across the country.

“We urge the federal petroleum minister to look into our demands,” he reiterated.

Karachi, with its two sea ports, plays a crucial role in the import and supply of oil to the upcountry.

“The disruption of supply from the port city can lead to all the petrol pumps and grid stations [in the country] being drained of fuel within 48 hours,” claimed Babar Ali, an owner of a fuel stations in Karachi.

Commuters slowly started to arrive at fuel stations on Monday evening to stock up on oil for the next few days. The owner of a vehicle waiting in a queue at a petrol pump said that the feared fuel shortage has forced him to get his car’s tank filled up to maximum capacity in order for it to keep running.

Ogra spokesperson told The Express Tribune that they are not trying to implement any new regulations, as claimed by the protesters. He said safety standard regulations were formulated in 2009, which the oil tankers association demanded to implement over the next five years.

“We are willing to talk to the protesters but cannot compromise on the regulations, which they had to implement by now after the passage of stipulated period,” he maintained.

On June 25, an oil tanker skidded on the road and overturned, causing huge amounts of petrol to leak. Hundreds of people from nearby villages rushed to the scene to collect oil. Soon after, a huge fire erupted in the oil tanker causing the tragedy.

It may be a shocking disclosure that over 7,000 oil tankers were not in compliance of safety standards notified by the regulator but they were still on the roads. This could cause a major incident like the Ahmerdpur Sharqia tanker blaze.

The disclosure was made in a meeting of Senate standing committee on petroleum and natural resources.

The committee was informed that there were around 11,704 tankers in the country, and Ogra has installed third-party inspectors at all the filling points to ensure that oil companies do not supply fuel to substandard tankers. Out of the total, only 4,653 oil tankers were in compliance of safety standards.

The Senate Standing Committee on Petroleum and Natural Resources was informed that all relevant authorities as well as oil companies were responsible for lack of safety standards at oil tankers.

Despite the strike threats, Senate body called for strict implementation of safety measures for oil tankers.

Meanwhile, addressing members of the panel Shahid Khaqan Abbassi, acknowledged that oil tankers in the country lack safety features and also called for a long-term solution to the issue.

He said there were several issues in this regard and all of them cannot be discussed in front of media.

Abbassi said that Ogra rules for safety standards need to be revisited.

“The general observation is that we make laws which are impossible to implement, we need to discuss the matter with the oil tankers, OCAC for a workable solution,” he said.

(With additional report by Zafar Bhutta in Islamabad)