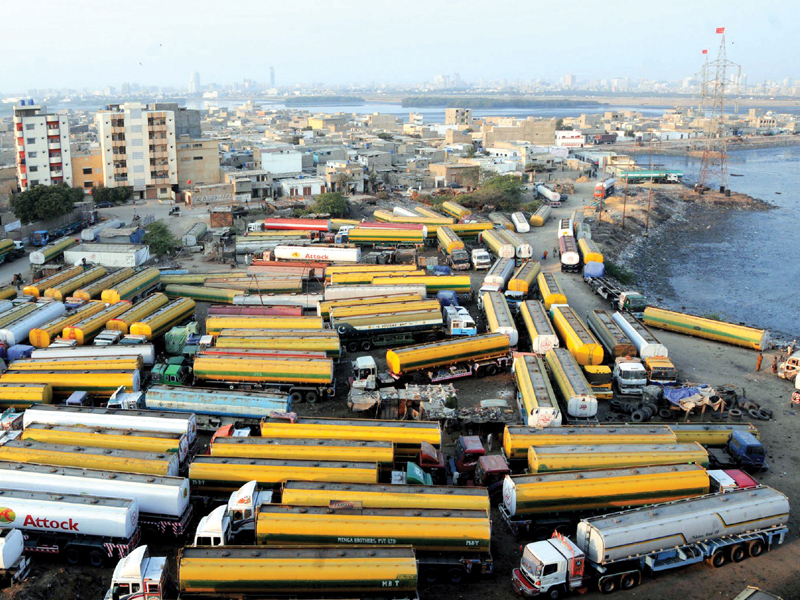 KARACHI: The Supreme Court (SC) directed on Thursday the provincial home secretary to open the Zulfiqarabad Oil Tanker Terminal by inaugurating the parking facility for large vehicles outside the city limits on July 27.

A two-member bench, headed by Justice Gulzar Ahmed, also sought a compliance report on the implementation of the court’s order.

The apex court passed this direction hearing a suo motu case about the parking of oil tankers on the streets of Shireen Jinnah Colony’s Block-1, at the SC’s Karachi Registry.

The suo motu proceedings began after a letter was written by Shagufta Bibi, a resident of Shireen Jinnah Colony, seeking removal of the large oil tankers from the residential locality. The applicant had complained that the tankers were causing massive traffic jams and great inconvenience to the residents of Block-1.

Ever since the top court initiated suo motu proceedings in 2012, the provincial and local authorities, as well as the oil tankers owners’ association and companies, had been directed, on several occasions, to contribute their respective share to make the new terminal operational to provide relief to the residents of Shireen Jinnah Colony.

Taking up the matter this month, the apex court had directed the provincial government and Karachi Metropolitan Corporation (KMC) high-ups to submit a report on the current status of construction work on the Zulfiqarabad terminal. Later, they were given a week’s time to provide all required facilities at the terminal, including appropriate arrangements for fire-fighting to cope with any emergency situations.

During Thursday’s proceedings, the provincial home secretary, Shahid Pervez, and the KMC officials submitted their reports.

They informed the bench that work on Zulfiqarabad Oil Tanker Terminal had been completed and the necessary facilities had been made available. However, the secretary alleged that a group of tanker owners were creating hurdles in the way of making the new tanker terminal fully functional.

Justice Ahmed told the home secretary that it was their duty to establish the writ of the government and open the new terminal for the oil tankers.

The bench members observed that the government could use its machinery to remove any hurdle.

The secretary said the government was showing restraint, as the area where the Zulfiqarabad Oil Tanker Terminal was established was ‘sensitive’.

The judges observed that the whole city was ‘sensitive’ but that did not mean that routine tasks should not be performed. The bench directed the home secretary and others to open the new terminal to traffic by inaugurating the same on July 27. They were also directed to submit a report on compliance of the court’s order within a week.

SEPA warns of action if industries do not install treatment plants