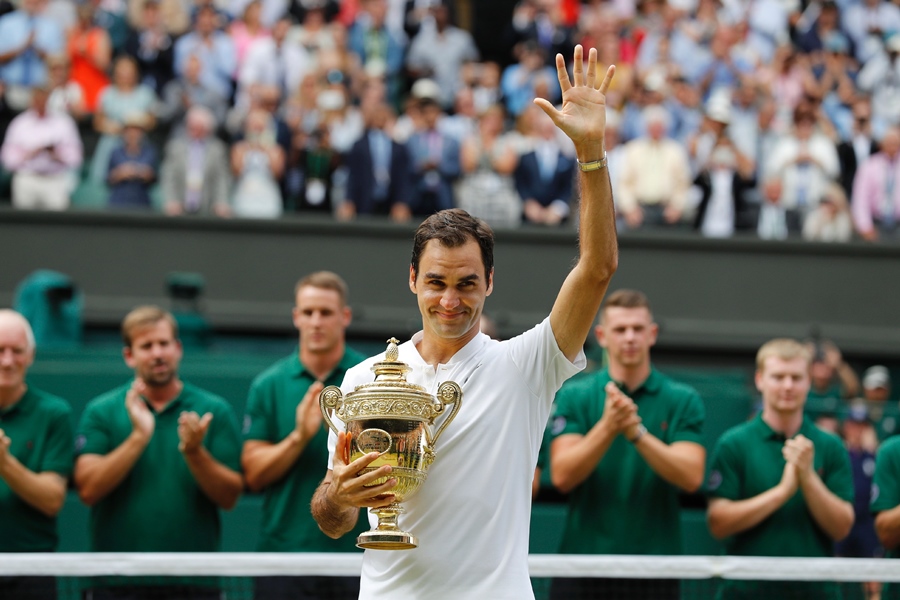 Switzerland's Roger Federer holds the winner's trophy after beating Croatia's Marin Cilic in their men's singles final match, during the presentation on the last day of the 2017 Wimbledon Championships at The All England Lawn Tennis Club in Wimbledon, southwest London, on July 16, 2017. Roger Federer won 6-3, 6-1, 6-4. PHOTO: AFP
LONDON: Swiss tennis star Roger Federer admitted on Sunday that he never thought he'd be a record eight-time Wimbledon champion and would even have laughed if he was told he'd win two majors in 2017.

The 35-year-old eased past the mark of seven All England Club titles he had shared with Pete Sampras since 2012 with a 6-3, 6-1, 6-4 win over injury-hit Marin Cilic in the final.

It was 16 years ago when Federer famously defeated Sampras at Wimbledon to announce himself as a star in the making.


Title for Federer, tears for Cilic in one-sided Wimbledon final

However, it wasn't until 2003 that he captured his first All England Club title.

Now he has 19 majors, four clear of closest rival Rafael Nadal on the all-time list.

"I didn't think I was going to be this successful after beating Pete [Sampras] here," said Federer. “I hoped to have a chance maybe one day to be in a Wimbledon final and have a chance to win the tournament. Winning eight is not something you can ever aim for. If you do, you must have so much talent and parents and the coaches that push you from the age of three on, who think you're like a project. I was not that kid."

Federer had been written off as a faded force when he was knocked out of Wimbledon in the semi-finals by Milos Raonic last year.

He immediately shut down his season to rest a knee injury, a decision which meant that for the first time in his professional career he would go through an entire campaign without adding to his trophy haul.

But his Australian Open triumph led to back-to-back Masters at Indian Wells and Miami before he skipped the clay court season.

A ninth Halle grass court title followed and on Sunday his record triumph in south-west London took his career trophy collection to a staggering 93.

Sunday's straight-sets cruise meant he was the first man since Bjorn Borg in 1976 to win the title without dropping a set.

He is also the oldest Wimbledon men's champion of the modern era.

"I'm incredibly surprised how well this year is going, how well I'm feeling, how I'm managing tougher situations, where my level of play is on a daily basis," added Federer. "I am surprised that it's this good. I knew I could do great again maybe one day, but not at this level. So I guess you would have laughed, too, if I told you I was going to win two slams this year. People wouldn't believe me if I said that. I also didn't believe that I was going to win two this year."

Federer also insisted he fully intends to defend his Wimbledon title in 2018 despite delivering what many fans fear sounded like a farewell speech to Centre Court.

"We never know what happens," said the Swiss star. "I hope to be back, I hope this wasn't my last match".

He later clarified his remarks, telling reporters: "Honestly, ever since I had the year I had last year, I think a year ahead of time, you know, with my schedule, fitness schedule, tournaments I would like to play." So I totally see myself playing here this time next year.

He added: “There's never a guarantee, especially not at 35, 36. But the goal is definitely to be here again next year to try and defend."

Title for Federer, tears for Cilic in one-sided Wimbledon final