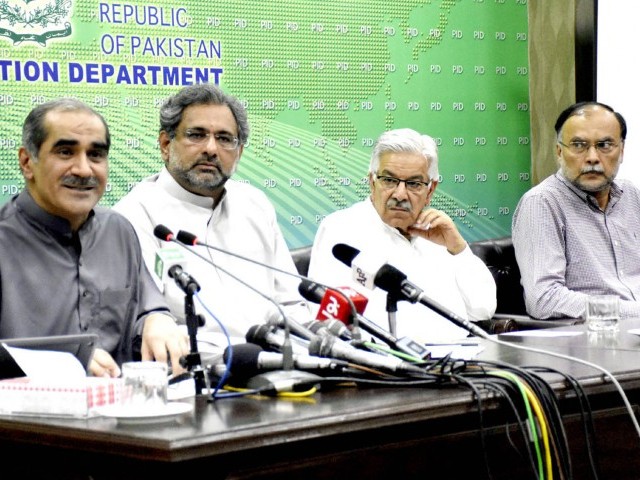 ISLAMABAD: Anticipating that the joint investigation team (JIT) is unlikely to give a clean chit to the Sharif family in its probe into their offshore properties, the PML-N has decided to stride the collision course, saying it will not accept JIT’s report if it does not include version of Qatari prince.

The apparent U-turn in policy of the ruling party – which had earlier said many a time that it would accept the JIT’s findings and the Supreme Court’s decision in letter and spirit – came just two days ahead of July 10 when the investigation panel is scheduled to submit its fourth and final fortnightly report to the apex court.

At a press conference on Saturday, four federal ministers directly attacked the JIT and declared to act in defiance should the JIT report came against ‘the will of the public’.

“If the statement of Qatari prince [Hamad bin Jassim who gave two letters during the hearing of the Panamgate case to establish money trail for Sharif’s properties] is not recorded and the JIT report is issued without hearing him, it would be a stigma of shame on justice. We reject any such report,” said Minister for Water and Power Khawaja Asif.

Asif went on to compare the ongoing probe against Sharif family with the investigation against Arsalan Iftikhar in a high-profile corruption case, when his father, Iftikhar Chaudhry, was the chief justice.

“Why Arsalan’s father was never summoned for probe? Because he was in a position of authority. Was that justice? In the ongoing probe, the entire Sharif family including the PM has appeared before the JIT.

“He [the PM] did not hide behind exemption the premier is entitled to. What else is justice and government’s support for justice?” he asked.

Asif also demanded that the proceedings of the JIT, including audio and video correspondences, be made public. “The nation will see what answers the PM gave to the JIT … what answers his daughter, son-in-law, sons, cousin and other members gave. This should come out in public in black and white.”

The minister said the countries – including Saudi Arabia and the UK – where the ‘presumed’ offshore companies were registered had not seen any foul play in the businesses of the Sharif family.

“It is strange that the countries where the so-called crime is said to have taken place have not initiated any kind of proceedings because any foul play hasn’t taken place at all. On the contrary, there is so much hue and cry here [in Pakistan].”

Our hands are clean. We have nothing to fear, says Premier Nawaz

Hurling direct allegations against the PTI chief Imran Khan, one of the PM’s most trusted confidantes said, “Has someone asked him [Imran] why his former wife sends him money?”

Referring to the Supreme Court’s observations in which it had likened the rulers with Sicilian mafia, Asif said, “Sicilian mafia doesn’t fight for an independent judiciary the way we did for the restoration of judiciary in March 2009.”

Speaking on the occasion, Saad Rafiq said: “The FIA was mandated to head the JIT but it was being headed by intelligence agencies. Media reports are confirming this,” he said, while referring to a seemingly controversial news item which claimed that a premier intelligence agency took ‘control’ of the JIT.

Referring to the recent appearance of PM’s daughter Maryam Nawaz before the JIT, he went on to suggest that summoning women for investigation purposes in any given case “is not the tradition of our society”.

Ahsan Iqbal and Shahid Khaqan also attacked the JIT while accusing it of foul play.

Some reports suggested that two JIT members – Military Intelligence’s Brigadier Kamran Khurshid and the National Accountability Bureau’s Irfan Mangi – had got hold of some important documents related to wealth details of Sharif family during their recent visit to Dubai and the ruling lot had jumped into aggressive mode in the wake of this development.

Reports also suggested that the Qatari prince deliberately used delaying tactics to deny the JIT the opportunity to interrogate him in order to allow the PML-N exploit this situation by claiming that by not recording Qatari prince’s statement, the JIT had left lacunae in the case.

Sources in the ruling camp said the PM chaired another important meeting with the members of his legal team to chalk out a final strategy regarding JIT’s upcoming report. The meeting was under way till the filing of this report on Saturday night.

“I urge the honourable Chief Justice of Pakistan Justice Saqib Nisar not to let it go and take suo motu notice of the contemptuous language used in the press conference. It’s necessary to uphold the supremacy of the institution of judiciary and to shun pressure tactics applied by the government,” he told The Express Tribune.

“The JIT was formed by the apex court. Ridiculing the JIT is tantamount to ridiculing the respected court,” he added.

Dilshad said the PML-N ‘physically’ attacked the Supreme Court in November 1997 and verbally attacked the top court yesterday, adding that the rulers were making mockery of the state institutions.

“They need to be taken on as strictly as possible – Qatari prince’s statement has no importance. He remained involved in serious cases of money laundering in the past and Qatar government has dissociated itself from the Panamagate and Qatari prince,” he added.